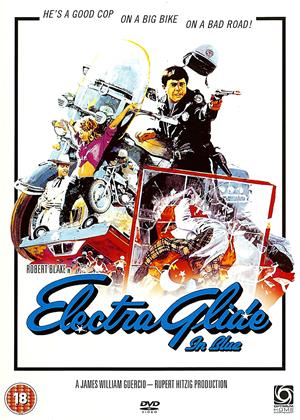 Reviews (1) of Electra Glide in Blue

Time was, when Hollywood studios were not preoccupied by blockbusters, when large studios supported offbeat movies – and often found themselves rewarded with box-office success which kept on going. Would, say, The Last Detail be made now? Even more so, Electra Glide in Blue (1973)?

It has reappeared on disc in all its enigmatic glory well matched by Conrad Hall's photography of bright and remote Arizonian territory as well as interiors whose darkness matches the inhabitants' souls. Written by Robert Boris and directed by record producer James Guercio), it turns around a self-consciously short motor-cycle policeman (Robert Blake, who had appeared as the eponymous Tell Them Willie Boy is Here a few years earlier). On those lonely roads, he is able to issue tickets to those caught speeding. (One might recall that Nixon brought in speed limits, not from any environmental concern but for fear that Middle East supplies would dwindle amidst the turmoil there.) His partner in this regards it as a safe job but Blake aspires to more, to become a detective; an ambition fulfilled in an unexpected way which becomes all the more resonant when he takes a contrary view to that of the coroner (Royal Dano, who was to appear in Twin Peaks, as befits a man who, here, smokes while contemplating what the body's innards might tell); Blake believes that a man found dead in one of these remote houses was murdered.

Here is something which appears to be another of that era's road movies, mixed with a thriller - but all the while it is a meditation about man's place in an unforgiving landscape, one only complicated by the sultry, hip-swivelling presence of a bar-room's

Jeannine Riley. A significant twist is provided by another familiar scene from movies of that time: the police visit a gathering of harmless hippies and attempt to gain a rapport.

Such a film can have a wider effect than it might appear. William Boyd (whom Gore Vidal sometimes addressed as Willie Boy) recalls watching the film at the time: “it was the first film I saw where I began actually to analyse how it worked; the first film I saw where I became excited by the process of movie-making, the manipulation of image and mood, rather than responding to it as a straightforward intellectual and sensual stimulant”. One can perhaps see many reflections of its elliptical method in the short stories he began to publish a few years later – among them “On The Yankee Station”).

It is not too much to say that here is a depiction of a national state of mind ravaged by experience, and depiction, of events in Vietnam. One might hanker for a disc of its soundtrack – very Seventies – and even, inspired by its title, wonder how much a Harley-Davidson might now fetch: the model ridden by those two was called an Electra Blue.