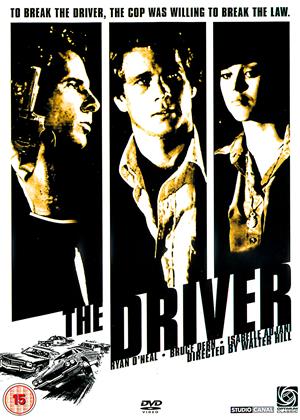 Synopsis:
The time is the present. The Driver (Ryan O'Neal) is the best "Wheel Man" for hire. His work in driving getaway cars are exhibitions in excellence, works of art. The Detective (Bruce Dern) is the top cop of the force. Nobody he tracks down ever eludes him. Except the Driver. As the Driver pulls off another job, the Detective lays in wait for him. But the Driver has already planted his alibi, and is one step ahead of him. Through his operative, the Connection (Ronee Blakely), he hires the mysterious young woman, the Player (Isabelle Adjani), to lead the Detective astray...
Actors:
Ryan O'Neal, Bruce Dern, Isabelle Adjani, Ronee Blakley, Matt Clark, Felice Orlandi, Joseph Walsh, Rudy Ramos, Denny Macko, Frank Bruno, Will Walker, Sandy Brown Wyeth, Tara King, Richard Carey, Fidel Corona, Victor Gilmour, Nick Dimitri, Bob Minor, Angelo Lamonea, Patrick Burns
Directors:
Walter Hill
Producers:
Lawrence Gordon
Writers:
Walter Hill
Studio:
Optimum
Genres:
Action & Adventure, Thrillers

Reviews (3) of The Driver

"Just drop me off here mate!" - The Driver review by pw

Hugely overrated "existentialist...neo noir." Saw this years ago and couldn't remember being impressed but was fooled (yet again) by a ridiculously high rating on Rotten Tomatoes and so thought I would give it another go on Blu-ray. Shouldn't have bothered.

Who ever thought that Ryan O'Neal could play a badass? He can't. Are we really meant to believe that the nasty hoods in the film are in any way intimidated by his wavy hair and studied attempt to look 'hard'. I'm all for going against type but he just doesn't pull it off.

Bruce Dern plays 'mad' detective but not nearly mad enough. In one scene, he attempts to provoke Ryan O'Neal by throwing a lukewarm cup of coffee on his crotch. O'Neal grimaces at the thought of the dry cleaning bill but just manages to stop himself going loco. Also, check out Bruce's curly perm and deep California tan. Reminded me of Papa Lazarou.

Yawn...had to stop myself fast-forwarding past the car chases and any scene featuring Isabelle Adjani's blank expression but mercifully the whole thing is wrapped up in 89 minutes. However, in that time you could watch two episodes of Cagney and Lacey or one and a half re-runs of Traffic Cops. Go for the Cagney and Lacey!

Squeals and Squealers - The Driver review by CH

What will happen to Hollywood when automobiles are not only driverless but guided by pavement devices which limit speed? Such tyre-squealing chases - often after the real owner has mysteriously left the keys in the ignition – are familiar, and can be enjoyed by those happier with pedals of a bicycle. The thought comes to mind during The Driver (1978). The cars have names (a Mercedes is notably roughed up) but the actors simply go by the task allotted them in a series of heists throughout a raw Los Angeles. The eponymous man at the wheel is Ryan O'Neal, a professional hired for his skill at making a getaway which leaves others standing – or lying on their sides as their car takes a tumble.

This is all too much for Bruce Dern, a decidedly weird detective whose hair aspires to an Art Garfunkel cut. He is determined to bring in O'Neal, even if it means that he has to depute a particularly unsavoury gang to act as go-betweens. Add Isabelle Adjani – well, love interest is pitching it a bit high – and here is something that, on the streets, is indeed explosive; elsewhere, in seedy rooms, it is, as written and directed by Walter Hill, close to the existential. Here are people with chasms between them, listlessness alleviated only by breaking the speed limit and turning the wheel just in time to avoid something coming from another direction at the lights.

Meditative it isn't, but its sparse dialogue is sharp – and one cannot help recall that scene in Truffaut's La Nuit Américaine where a stunt driver wears a long wig so that, on screen, a woman appears to be at the wheel. And one wonders whether Hill had to use day-for-night techniques to bring in all this more safely.

Driver or crash test dummy? - The Driver review by TE

Ryan O'Neal's acting ability is well suited to playing the wooden, lifeless character of the film's title. Things only come to life when the excellent Bruce Dern is on screen as the obsessed detective. The crazed glint in Dern's eyes even overcomes the horror of his late 1970s Afro-bouffant hairstyle.

The movie is a poor Hollywood attempt at a French 'noir'. Unfortunately it is not dark enough or hard-edged enough. Lengthy sequences of fast driving cannot disguise a plodding narrative or the predictability of the ending.