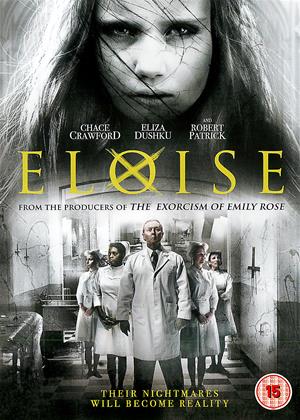 Synopsis:
Inspired by real-life events, 'Eloise' is a chilling and haunting tale of terror starring Chace Crawford, Eliza Dushku and Robert Patrick. The Eloise Insane Asylum in Michigan was one of the world's largest and oldest institutions of its kind. Widely known for its breakthroughs in medical testing, the lesser known story is that of the patients; the unwanted members of society put in there by family members unwilling to care for them. Once committed, these people became subjects of inhumane testing by doctors given free rein to experiment.
A century and a half later four friends in search of a death certificate that promises to grant one of them a large inheritance, break in to the abandoned asylum. The group not only find that the institution houses a horrifying history but also discover the truth about their own tragic pasts.
Actors:
Eliza Dushku, Robert Patrick, Chace Crawford, Nicole Forester, Brandon T. Jackson, Martin Klebba, P.J. Byrne, Tim Holmes, Jordan Trovillion, Ricky Wayne, Rose Anne Nepa, Dan John Miller, Matt Philliben, Amber Whelan, Milica Govich, Michael Alexander, Annie Kitral, Connie Kincer, Eric M. Myrick, Heather Fairbanks
Directors:
Robert Legato
Producers:
Sanford Nelson, Tripp Vinson
Writers:
Christopher Borrelli
Studio:
Signature Entertainment
Genres:
Drama, Horror, Thrillers

Chace Crawford – a Hollywood name if ever there was one – plays Jacob Martin, a young man whose father has just passed away, leaving him $1.2 million. However, to avoid seven years of red tape regarding getting his hands on the money, he has to prove the death of his Aunt Genevieve (Nicole Forester), whowas committed to an asylum, and whose death certificate is held there.

Now, this is really just a convoluted way of giving ‘a group of friends’ a reason to break into and explore a spooky, abandoned medical facility late one stormy night. I’m quite happy with the fact that the actual reason for them being there doesn’t survive much probing, because the location is very creepy, and the cinematography really enhances that. Equally, the incidental score and sound design plays a huge part – in fact, Ronan Lander’s music might be my favourite aspect of the production. The storyline is pretty confusing, but again, I like something that requires the audience pays attention, even in this case, attention might not be enough to make sense of it all.

SPOILERS - Years ago, Jacob’s aunt was admitted to the asylum for her worsening schizophrenic outbursts. Flashbacks that seem to emanate from the building itself inform Jacob (and us) she was actually made pregnant by Robert Patrick’s pioneering but evil Doctor Greiss (either after her incarceration or before, this is not made clear) and to keep the liaison secret, the doctor orders the child destroyed. However, the child is rescued and allowed to escape the hospital, and grows up … to be Jacob. On returning to the asylum at his father’s last wish, Jacob is seemingly killed (we last see him being incarcerated in a morgue drawer, gagged so ‘he doesn’t wake the dead’), which somehow negates the child’s existence, or at very least, gets rid of the problem. There, is that clear? I haven’t made any kind of study of this, but that is my take on a story that leaves a lot to interpretation. Again, I have no problem with that approach, but there is a lot to take in here. For example, the room full of containers full of ashes, some of which are spilled, has some significance. As does the somnambulistic vagrant man who appears a couple of times. As does the nature of the seemingly shifting time lines. Answers on a postcard please …!

The fact that I am still trying to puzzle out some of these moments, and the fact that I will inevitably watch this again indicates that I care enough about ‘Eloise’, and I did enjoy the murky nature of the story-telling. Even the characters, who appear dull and unappealing at the beginning, grew on me. I’m giving this a 7 out of 10.