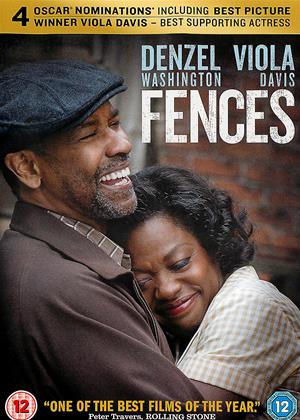 Superb acting, and ok it took a little time to warm up, but then I realised it was based on a play, and then all the scenes and dialogue made sense.

If you like movies that involve deeply moving storie and relationships, that are slowly revealed to the audience then you will love this movie.

Well worth the two hours to see such an uplifting movie.

A Fence Keeps People Out and Traps Them in Too... - Fences review by DS

Fences is a hugely successful stage-play and this film mainly features the cast from that play. Bearing that in mind and bearing in mind that August Wilson was trying to show a slice of life for working-class black families in the sixties you are not going to get much ‘action’ or anything the average cinema-goer would see as exciting. Denzel Washington and his ensemble must have slipped into their roles like familiar slippers. It shows.

Viola Davies and the rest of the cast are consummate actors so you know you are in some safe hands if nothing else. The film has one actor that the stage play didn’t have though and that is the city of Pittsburgh which is where Washington filmed this adaptation and if nothing else it helps to layer on the realism.

Being a silly old man from Hampshire I cannot vouch for the language, slang and nuances of the script in relation to 1950s Pittsburgh but the language and conversations seemed real to me. In my opinion, working-class people from that era with a limited access to good education probably could not express themselves quite so clearly and if my grand-dad was anything to go by they did talk as much and feelings were never discussed. Mind you if you made a film that realistic, it would be very short and very boring, so it is not any sort of criticism.

The small situations, battles and dilemmas the family finds themselves in seem real and in all honesty, they could easily have been set in any city and with any family of any creed. I feel Wilson wanted the story to be universal and feel relevant to anyone regardless of skin colour or ethnicity anyone whose family was poor and had to work really hard for every penny can take something from it.

Certainly, they are many people who can recall a wife, a tour-de-force by Viola Davies, who through some strong sense of loyalty and what is right stands by her man despite him doing many things that don’t deserve that loyalty. The film does not pontificate, no one says this right its just how it is and how she feels. The roles of Maxson’s two sons are ably filled by Hornsby and non-cast regular Adepo, Mykelti Williamson plays the very difficult role of Gabriel’s brother who suffered a severe head wound in the war, in the wrong hands this could easily be comedic and finally Stephen Henderson is a stand-out as Maxson’s long-time and loyal friend who tries to keep his friend on the straight and narrow. It’s all good.

You do have to bear in mind this is a near-direct transfer of a successful stage play to the screen. It is going to be talky and the players are going to have to-and-fro dialogue zipping between them. Its main weakness is probably that it does seem ‘stagey’ at times and if you do not like watching stage plays then you will probably not like this.

Film adaptation of a play - Fences review by BP

- a film which is based on a play, therefore with a large amount of poetic dialogue

If you can overcome these two things, then hopefully you would really appreciate this wonderfully written and beautifully acted movie, as I did.

Biopic of early America and the tribulations of being black and struggling. Lots of awards, and cannot fault Denzel doing his thing, but not entertainment, and a bit dour. Prob not in the mood............

The trailer for this film looked brilliant. Unfortunately neither my husband or I could understand anything anyone was saying so unfortunately after about 15 mins struggling we gave up!

Couldn't take my eyes off Denzel Washington as the flawed character , bitten by cynicism and struggling to get up under racism. He was incredible. And then I found out he was also the director. Excellent rest of the cast too but Denzel Washington was the star. I didn't have any trouble with the dialogue as I had subtitles switched on anyway. It is slow-paced because it's a drama, not Fast and Furious 7!

Only watched this because of the actors and even then only watched about 1/3rd of it. Too fast speaking and boring for me. Shame!

Should be removed from entertainment - Fences review by JS

This ranks as one of the poorest films I have had the misfortune to send away for.

The wife and i managed 10mins. That was enough.

up to expectations - Fences review by JB

I had seen a preview of this film on the Film Review with Mark Kermode and though he thought it overlong I did not. At times I found some of the dialogue hard to hear/understand, but in all found it a very moving film. The actors were fabulous especially the heroine, she was amazing.

I lasted a bit longer than many but gave up. Dialog was too fast to follow so we couldn't get interested in the characters so the whole thing plodded. Love Denzel but not in this.

sub tiltles a must - Fences review by DH

I'm really grateful that other people suggested the sub-titles especially at the start when you are tuning into their pattern of speaking. This is beautifully acted film but did not hit the mark.

My low score of 3 is purely because it did not entertain or move me so the writer failed. Acting 5 out of 5. If I had a main criticism, it is too long, the time dragged.

Fences features two of the most prominent African-American actors to date: Denzel Washington playing the quintessential working man Troy Maxson, and Viola Davis as his stoic but emotionally supportive wife Rose Maxson who together go through life’s challenges for better or worse. Now, this may sound like it’s being lifted straight out of a theater brochure, and this is mainly due to the fact that Fences is indeed an adaptation of a stage play that director Denzel Washington (yes, he directs and acts in the film as well) chose to keep that theater look and feel through and through (down to some prominent details even). And therein lies the catch: adapting a stage play into a screenplay is a tough job to do right, but Denzel and his team might have pulled it off regardless.

The film revolves Denzel Washington who, as said, is a blue collar American citizen trying his best to raise a family in 1950s America. His past continues to haunt him to this very day as all the blame gets assigned to the “white man”; and so, his son feels these past tremors in the form of discouragements from everything in life, and particularly sports, something young Cory (Jovan Adepo) is very fond of doing. But no, the ways of Troy are those of spite, and not of love, although one can argue that tough is how Troy experiences love. To make matters even harder for the Maxson family, Cory’s brother Gabriel (played brilliantly by Mykelti Williamson) is mentally-challenged and even the littlest things in life come hard for him to properly do. Troy knows this, but he is a real stoic in his demeanor, although deep down he is hurt and he suffers for Gabriel’s unfortunate fate. Which is kind of paradoxical, since Troy believes in everything BUT fate.

Then there’s Viola Davis as Rose Maxson, nailing a tremendous performance that would surely secure her an Oscar this year (an overrated honour in my humble opinion and one that’s way overdue, but until an alternative arises, there’s nothing we can do to stop the charade). Anyways, Rose is subtle in her actions, with her reserved emotions playing well against Troy’s numerous imperfections. Finally, she gets the spotlight later in the film, as all the accrued emotional baggage suddenly erupt in Troy’s face and ground him to reality which he so desperately avoided doing. And everything feels as real as it can get, with no shortcuts, side-steps, or any of the sorts: Fences manages to portray true life in its purest, most carnal form ever put to screen.

Finally, Fences is a difficult experience to endure, but one that’s worthy of your hard-earned time and money. A film of this magnitude is made every 10 years or so, and Fences is definitely a member of that club.