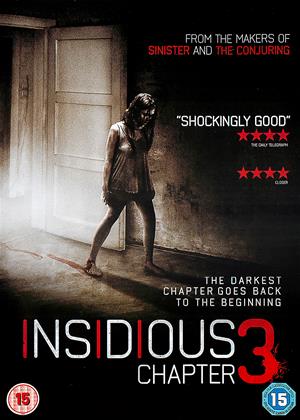 Good film but not scary - Insidious: Chapter 3 review by gazmb

I enjoyed this 3rd film in the framchise series, sadly for me it didn't seem very spooky or scary. It needs to be creepier for me . The story is good and keeps you interseted.

This film falls into the all to predictable formula of this kind of horror film, which goes along the lines of quite, quite, bang. While this is certainly better than the second film, it still leaves a lot to be desired, the characters aren't especially interesting, "twists" are sign posted early in the film. If you can leave your brain at the door and get on board with a silly formulaic horror film then there is some merit in this film. It's certainly not a horror classic of the best that director Leigh Whannell has produced, but just about worth a rent.

If you’re drawn to this by Leigh Whannell’s terrific second and third films as director (Upgrade, The Invisible Man), this first feature will be a terrible disappointment. It’s nothing more than a clichéd jump-scare wannabe horror film. It’s shot mostly in the dark (which people of course explore with torches) and gets its “horror” tag from a “supernatural demon” who may or may not appear out of the shadows or jump from off-screen to a shriek of orchestral muzak. Nothing wrong with the direction, but the whole film is just one long boring cliché. The only thing worth watching is the Making Of featurette about the one interesting scene featuring a car crash.

As the Insidious franchise begins to blossom, there’s a bit of a concern with the direction it will take given that director James Wan left the series with the third chapter being directed by co-creator Leigh Whannell. The good news is that Whannell chooses to focus the series on its biggest strength which happens to be Lin Shaye for her reoccurring role as elderly psychic Elise Rainier. She is no longer reduced to a cameo of a supporting role, but takes on the part of being a leading vessel for the world of the paranormal. Think of her as the ghost-fighting Mad Max of other world, offering her help to those who seek it. And, yes, she literally fights ghosts in this movie.

Elise finds herself pulled back in once more to contact the spirits that have not left this realm. The teenager Quinn (Stefanie Scott) comes to the wise woman seeking a chance to speak with her late mother who passed away from cancer. Though remarking how she’s too old for her draining abilities, she just can’t so no to a girl who wants to talk to her mother once more. It’s something she desperately needs with her current situation of an overworked father and a bratty little brother. When Elise reaches out for Quinn’s mother, she doesn’t find a kind soul and instead an evil black soul that threatens her family. Elise is spooked and tells Quinn to look elsewhere for help, but we know she just can’t stay away from saving the day. Well, her and the other reoccuring characters of the series; a bumbling ghost-hunting duo played by Angus Sampson and Leigh Whannell himself.

While Insidious plays into the same formula for the jumpscare method of generating frights, it’s surprisingly effective at weaving characters and emotion around the frights. While you do feel a real sense of loss for poor Quinn, Elise ultimately steals the show for what she has left to look forward to in life. Acting as a prequel to the events of the Lambert family, this is more or less her origin story about how she came to terms with losing her husband and gained the enthusiasm back to hunt down ghosts. And once she gets her spirit back, there is no stopping her. She doesn’t hide behind ancient words and ghost artifacts to get of the evil. Elise runs straight into the dark realm of scary beings, sidesteps the usual emotional traps and begins to push and shove the ghosts with such force you could swear some elaborate fight scene was just about to start.

There is never a moment where a jumpscare feels wasted as a fakeout. Whenever you think there is something bad about to happen, it usually does. One of the biggest shocks is how Quinn is hit incredibly hard by a car that comes out of nowhere on the street. As if that weren’t freaky enough, Quinn temporarily dies on the table and has an out-of-body experience where a dark ghost has taken interest in her presence. When she awakens, Quinn is left in a wheelchair in her room to be attacked by the ghosts Rear Window style. Awaiting her in the blackness of her room are some very creepy spirits including faceless women that slither along the wooded floor and a gangly figure with a breathing mask. These are not entirely just being only she can see as the ghosts often leave black inky footprints in their wake.

I especially dug the atmosphere of setting up the ghost world as a throwback to The Shining with red carpets and strange entities behind the doors of a hallway. Elise approaches one where she spots a girl facing a corner. The girl grabs the back of her hair and forces it open to reveal a face that shouts for her to leave. That’s the cool kinda creepy that’s been missing from a lot of horror films that try too hard for a scare.

Insidious: Chapter 3 may not be as spooky as it set out to be, but it’s a very assuring step in the right direction for this franchise. The films have finally found their focus and it’s with Lin Shaye supported by comic relief Angus Sampson and Leigh Whannell. The movie ends with them all together laughing and talking about going into business together. It sounds like your standard lead-in as a prequel for the first movie (which it clearly ends up being by the final shot), but I’m much more hopeful that it’ll mean we’ll get to see these three once more in bigger roles. The Ghostbusters don’t have anything on Lin Shaye. Who needs proton packs when you can just give the ghosts the old one-two?