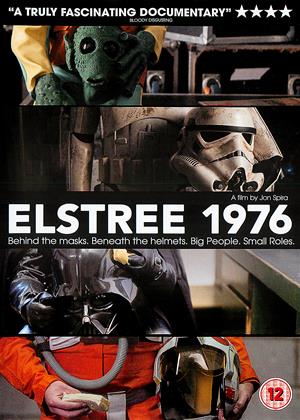 Synopsis:
A heartfelt documentary that puts centre stage a group of people who were intimately involved with a pop culture phenomenon. In 1976, the original Star Wars movie was shot in suburban North London. Nobody involved had any idea how big the film would become, many couldn't even remember the title. Yet, for the extras and actors in smaller roles, their faces hidden behind masks and beneath helmets, this seemingly insignificant job would go on to colour their lives even four decades later.
Filmmaker Jon Spira has tracked down a cross-section of these actors and extras, including David Prowse (Darth Vader) and Jeremy Bulloch (Boba Fett), to find out what it means to have been a part of the most beloved cinematic universe of all time.
Actors:
Paul Blake, Jeremy Bulloch, John Chapman, Anthony Forrest, Laurie Goode, Garrick Hagon, Derek Lyons, Angus MacInnes, David Prowse, Pam Rose
Directors:
Jon Spira
Producers:
Steve Milne, Hank Starrs
Writers:
Jon Spira
Studio:
Soda Pictures
Genres:
British Films, Documentary, Special Interest
Countries:
UK

Sign up
Wallace and Gromit: The Curse of The Were-Rabbit

Straight from what’s possibly known as the largest cultural achievement in the last 50 years that is the Star Wars phenomenon, sprouts this little behind-the-scenes gem of a documentary filmmaking that uncovers the bone marrow which sturdily holds all the pieces together. In Elstree 1976, special attention is given to the so-called ‘little people’, who more often than not find themselves contributing more than they can ever imagine. These are the extras, the carpenters, the stuntmen who never seem to receive praise as much as the big stars do. Elstree 1976 however, makes sure they do.

The film is a typical entry to documentary lists. But, its approach is atypical: it tracks down all actors who in a way contributed to the original 1976 Star Wars and asks them questions that elicit nostalgia and bring them one step closer to their past. Whether they wore masks or not, they fondly remember how their experiences went by, what made the most impact for them and how Star Wars shaped their future careers by becoming a staple in filmmaking all around the world. It’s a nice touch that casts nostalgia all over its material, as well as the people involved in making the project.

It’s also interesting to note how many of the actors playing masked characters went on to do great things on their own. Thus, when a certain actor reveals what he chose to do next in his professional acting career, we the audience experience an epiphany that somehow connects us with the person speaking on a personal level. This is a power that few genres manage to evoke ever, and it’s best when done through the lenses of a documentary feature.

Now, let’s be clear: the big names are overlooked and for good measure – their roles in Star Wars are documented in various formats to the point of over-saturation. This is where Elstree 1976 differs from other documentaries that tackle the same subjects – it leaves space for actors who played minor characters to extensively explain themselves where previously they couldn’t. In a sense, these ‘minor’ characters finally got to live their stardom once and for all.

What director Jon Spira’s film isn’t is non-stop full-blown action. Elstree 1976 leaves little space for footage from the actual film and instead rides on the back of anecdotes that, told well as they are, carry the momentum forward until the very end.

Ultimately, Elstree 1976’s flaws can be easily overlooked and forgotten, for the sheer nostalgic joy this piece brings is enough to fill an entire room with happy moviegoers. For the Star Wars fan, this would be the ultimate rare experience never to be missed.