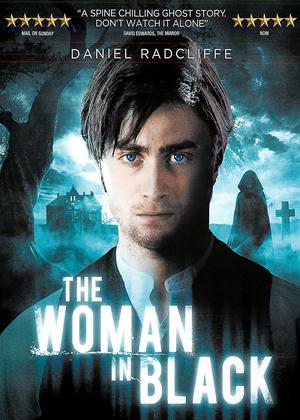 Reviews (7) of The Woman in Black

This is a really first rate film - and nice and efficient, at 90 minutes - based on Susan Hill's superb classic ghost story The Woman in Black. I thoroughly enjoyed this - it kept me and others with me rooted to our seats, and on the edge of them, and made me jump more than once (the director's intention of course!) Nicely filmed and with period details correct; creepy imagery, even the CGI. My only criticism is that two of the main actors were middle-aged men who looked too similar to each other: film makers usually do this when casting actresses - many films seem to have 2 or 3 young blonde women in them, so confusion results! So when you watch this, concentrate on who is who! BUT apart from that annoyance, this is a nice neat efficient creepy ghost story, happily only 90 minutes long (Hollywood would have added some unnecessary back story and made it 2 hours and more...yawn...). Recommended.

I didn't realise that Hammer Films were still in business but they have produced a good old-fashioned scary horror film here. Not a gory slash movie but a suspenseful, chilling ghost story in the MR James tradition. You will jump out of your seat at regular intervals. Daniel Radcliffe does, I think, do a good job as the lead despite the disadvantage of being obviously much too young to have been married, lost his wife in childbirth and acquired a seven year old son within the first five minutes of the film.

This ticks all the boxes for the old fashioned ghost shocker; decaying dark house, the death of children, the mad woman (women?) in the attic. It's quite well written and very well played, D Radcliffe doing his best, which is jolly good in the circs, and all other participants handing in a workmanlike performance.

Trouble is, for me it was simply an extended ghost train ride, scary but almost predictable. I can well imagine all the HP fans squealing and clutching each other as their darling struggles with a combination of the mother from hell and the original castrating woman. If you like this kind of thing, this is the sort of thing you will like

In his first film role after the Harry Potter series Daniel Radcliffe is just right as a grieving young lawyer in this Hammer production of the celebrated novel by Susan Hill. This is just what you want in a ghost story. A Victorian English setting on a fog bound marsh with suspicious locals and a very creepy haunted house. And the film is a simple, quintessential haunted house story that really works, it doesn't rely on gore or 'cattle prod' shocks it creates a creepy atmosphere, gives you glimpses of something sinister every so often and keeps you on the edge of your seat. Radcliffe plays Arthur Kipps who is grieving for his wife who died in childbirth four years earlier. He dotes on his young son but his distracted mental state has put him in difficulty with his firm. As a last chance to show he wants his career he is sent to the north of England to close the estate of an elderly widow recently died. On arrival he finds the locals are suspicious of him and unhelpful but it's only when Arthur has to spend time in the old woman's mansion positioned on the edge of a tidal marsh that he discovers the dark past of the house and why the village folk are so frightened. As a fan of the novel and the earlier TV adaptation too I still recommend this and urge anyone not to make comparisons. This film keeps the shocks restrained and any reveals are limited and carefully introduced, which gives it a real spooky feel. Great story and a perfect English ghost film.

Spooky - The Woman in Black review by CP Customer

Radcliffe adopts a fixed 'troubled' look all the way through....the real star, though, is the fantastic old house.

Fab Victorian costumes, sets and props help to create a real spooky feel all the way through.. If you like suspense and atmosphere above gory special effects, you will like it.

What to say about this film refreshingly scary without $100million dollars worth of electrickery............good acting great screenplay costumes pathos its got the lot ............after seeing the stage play i wasnt expecting that to be topped but this does it well done all lets hope it wins everything out there

Commendable effort - The Woman in Black review by CB

Having seen this story on the stage, I was expecting the film to take me to new heights of ghostly scariness. Apart from when the face appeared at the window at close quarters, nothing much scared me. In fact, the theatre production was more scary. Radcliffe was good.

The Woman in Black review by Alyse Garner - Cinema Paradiso

Star of the Harry Potter franchise Daniel Radcliffe plays a young lawyer in Victorian England who relocates to a remote village, to discover the ghost of a mourning woman is terrorizing the locals.

Made under the banner of the British horror movie studio, Hammer Horror, The Woman in Black is an interesting addition to the wealth of adaptations of Susan Hill’s 1980’s novel. This interpretation combines the traditional Victorian horror style with the dark sensitivities of modern cinema go-ers and does so quite effectively. The Woman in Black is a surprisingly creepy and genuinely spooky horror film; filled with did-you-or-didn’t-you see that moments, and elements present only in some of the tensest of modern thrillers.

I was genuinely impressed by The Woman in Black and feel it could have been a truly remarkable movie, if not for one very poor choice. Radcliffe, cast here as a grieving single father, is not only ill suited to the role but also performs poorly in it. I struggled throughout to see Radcliffe as a father based not only on his physical not-really-a-grown-up-yet appearance but also on the globally accepted association of him as that wizard with the scar.

Furthermore, I also felt he lacked the emotion that was required for the role; haunted by a ghost who has experienced the most harrowing possibility to any parent should move Radcliffe in such a way that his parental and instinctual fear should both be abundantly clear to any viewer; what we are instead treated to is a rather slack and shocked facial expression.

It really is a terrible shame; I would have far rather watched an unknown actor play the role well than someone famous with the on screen presence of a flobberworm.