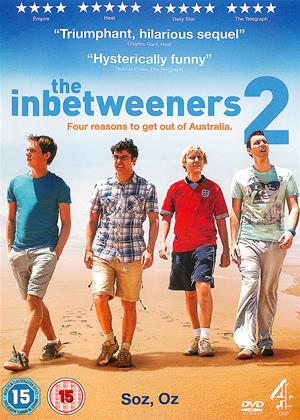 Synopsis:
Having left school in the summer the boys have gone their separate ways, most noticeably Jay, who delights in telling the others via email that he is on a 'mental gap year' in the 'sex capital of the world' - Australia. Neil is desperate to see Jay, and Will and Simon are having such a miserable time at Uni they decide they might as well visit him to see what the fuss is about. Once in Oz, the boys discover Jay's tales of super-stardom in Sydney aren't quite true, but Will sees this as an opportunity to embark on a travelling experience, with cool people who are doing a gap year properly.
Actors:
Simon Bird, James Buckley, Blake Harrison, Joe Thomas, Emily Berrington, Freddie Stroma, David Field, Belinda Stewart-Wilson, Tamla Kari, Lydia Rose Bewley, David Schaal, Alex MacQueen, Greg Davies, Martin Trenaman, Robin Weaver, Felicity Ward, Oliver Johnstone, Brad Kannegiesser, Susan Wokoma, Lucy Cohu
Directors:
Damon Beesley, Iain Morris
Producers:
Spencer Millman
Voiced By:
Zara Symes
Writers:
Damon Beesley, Iain Morris
Studio:
Channel 4 DVD
Genres:
British Films, Comedy
Countries:
UK

Reviews (5) of The Inbetweeners 2

I never expect much from a comedy sequel, but I was pleasantly surprised!!

If you enjoyed the first movie a have no doubt that you will love this one just as much, the film feels completely different and fresh, although I'm not sure why as it's all of the same stuff we love about the Inbetweeners. Cringe fest!!

Not as good as the first, but very funny. Definitely would recommend if you have a couple of hours to spare

Crude, lewd, adolescent cringe-fest sequel - and funny with it! - The Inbetweeners 2 review by PV

This sequel is well worth a watch, though not as good as the first Inbetweeners movie (which made anyone involved in it rich through having 'points').

Slickly written, with plenty of pace and some accurately portrayed irritating gap year characters (esp Ben the SO true to life white-dreadlocked public school tool - I have known many like him!), this is at times very funny indeed.

Yes, it's crude, lewd, laddish, adolescent and often childish - BUT that is FUNNY and I do so which the po-faced twerps who run TV and diversity-worshipping petals at the BBC especially would get off their sanctimonious high horses and realise that (instead of commissioning endless shows by unfunny and 'politically correct' female comedians).

Will is a true hero for the modern moronic age - a throwback to a more rational, intelligent world, who thus stands out like a non-texting thumb amongst a crowd of digital dunces.

Having praised this, now some criticism - there are some gaping plot holes (characters and plot lines, eg the streaking one, just vanish for no reason).

But the characters are strong and well-drawn, and the 4 Inbetweeners (the mother, father, child and wildcard - screenwriters will know what I mean) ping well off each other.

Sure, it could all have been on TV, made as a series of 4 or 6. But these actors are now rich and want to do other things, so fair enough.

This film is more enjoyable that, for example, the tedious Grand Budapest Hotel which was so awful I switched off half way through, and far better than most BBC drama, which plumbs new depths of groaning tedium with every diversity-trained step it takes.

Laughing out aloud at the puerile humour feels like a guilty pleasure. This comedy is just gross but I'd seen the first film, so what did I expect to be different in the second? Actually, it's kinder, the characters are portrayed as more likeable in their various inept ways. But it's still gross humour!

Awful - The Inbetweeners 2 review by IL

Maybe I'm getting long in the tooth but I'm afraid I don't found this type of toilet humour the least bit funny, gave up after half hour.

Despite the fact the characters and cast visit my home of Australia in this film, there is no way I can give this film more than one out of five stars. I even considered giving it zero, but the system wouldn’t let me. There is nothing redeemable about this film, and I feel the funding could have been much better spent.

This film follows the four - rather unlovable - lads: Neil, Will, Simon, and Jay. When Jay invites them to join him on his gap year vacation in Australia, they jump at the chance, eager to rekindle the sexual exploits of their past - much of which they lost after leaving school. As you would expect, their adventures don’t exactly turn out like they originally planned, and they begin to fight. Despite Will wanting to do something cultural while in the Land Down Under, the other boys - not men - only want sex and alcohol.

Need I repeat again how much this film is not worth the time put into it? It should come as no surprise that this film only came about because apparent ‘fans’ wanted a sequel to the first one - and a television series. You will not find a compelling story, entertaining characters, or intelligent dialogue.

When it comes to the acting, I must admit that I have absolutely no idea who any of the cast were. They somehow seem to be gaining fans and funds from this series, and I doubt they are talented enough to ever get another role.

Let’s not kid ourselves, experimental and creative filmmaking will not be found in this film. Camera movements were very generic, and not something film-lovers will appreciate.

There is something about this sort of outrageous and smutty humour that seems so popular, and yet I don’t understand it. The dialogue wasn’t witty or smart, and the jokes were cliche at best.

I’m not going to say that every film should be made to be acceptable to me, and I know there are a great deal of fans who find this series riveting, but it is the level of disrespect the cast and crew must have for women that is disgusting. Without going into detail, the behaviour and opinions were awful, and it scares me that people actually think this way.

Somehow, The Inbetweeners 2 has received quite positive reviews. Online and in-print reviews have stated acclaim for their smutty humour, with the film being an adequate progression from the popular television series. There are still those that support my views, but more for the contrary, unfortunately.

All in all, this is ninety minutes I found utterly wasted. The language and content is definitely not for young audiences, and I implore people to visit Australia and see for themselves that we are nothing like this film portrayed.