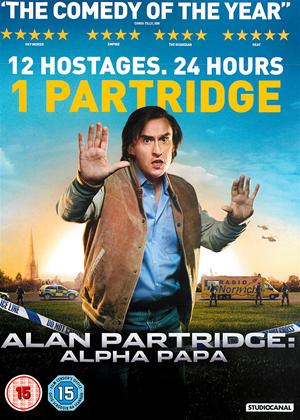 This is hilarious...quite simply put! The old Patridge-isms are all here and the excellent use of his ability to try and turn any situation into something about him is fantastic.

At one point, I did feel it could have added something a little extra - you know the feeling where you're waiting for the 'moment' to arrive. It didn't (arrive), so I sat there like a cat who thinks it's getting cream but instead gets full fat pasturised milk and thought 'ohhh'.

But then I realised it could have been (in order of disappointment...ascending)- UHT, skimmed or sterilised milk and it wasn't. So I got better and I love it...with just a little love space left for my imagined gold top (Jersey)/Taste the Difference Whipped moment (imagined)!

I have never found Steve Coogan funny. Given the good reviews I gave this a go, not worth it. Coogan's only character (since his stand-up career) is one who appears to be arrogant with the occasional moment when he seems to parody himself but then returns to being obnoxious. There are few comedians who can make unpleasantness funny. Ricky Gervais is another who has tried and (in my opinion) failed badly. His character in this is very egotistical and abusive, I think to make this work you would have to like and invest a lot of yourself into the actor. If you think highly of Steve Coogan then it might work for you.

They had just about enough material for a sketch on a comedy show, but chose to make a film instead. Why? True, it has a few laughs in it, and some good ideas, but it wears thin very quickly.

This film added more to the rarther obscure reaperance of Alan Partridge on Sky TV and a Foster's beer sponsored site which had a cult appeal to fans of the original Steve Coogan created character who went from TV stardom to a job in local radio while living in a temporary house in his garden and then a hotel. As a fan of the show and local and internet based radio I enjoyed this film as an adventure featuring a comedic hijacking and comment on the corporate homogenisation of local commercial radio. The characters are back for this film and the Partridge jokes in his familiar setting. I was surprised to find this film was being made but I am glad Steve Coogan has done more with this character and this film can reach more of his audience than Sky TV and the internet specials, so fans can enjoy a feature length film like I did.

You either like Alan Partridge or you do not. We watched the film about half way through and then turned it off, could not engage with the humour, if that is what it is called..

One for the fans - Alan Partridge: Alpha Papa review by MD

If you're a Partridge fan you will find a good number of laugh out loud moments, but there's not enough here to keep the casual viewer interested. As is often the case with comedy movies adapted from TV shows, it runs out of steam in the last third as the over arching joke begins to wear thin. To cover this the action ramps up, but this has never been what Alan Partridge is about. He's much more suited to life in the North Norfolk Digital studio where he can quiz listeners on their favourite monger (fish, iron... or war?). If you're a fan, it's a must watch, but avoid if not.

Steve Coogan brings his unpleasant everyman to the big screen while ensuring he remains just as repulsive and offensive as he was, even given the time hes been away. Both clever and stupid at the same time, Alpha Papa is a big, bold tale of how finally after all these years Alan’s terrible deeds are finally catching up to him.

The film follows Alan (Coogan) as he tries to keep his job at a local Norwich radio station despite the new owners determination to fire someone. When Alan suggests Pat (Colm Meaney) he sets events in motion as Pat decides to take the staff hostage during a party at the station. However when Alan is sent in as negotiator things begin to really unravel as Alan tries to make cooler heads prevail but forgets to control himself.

Full to the brim of the same kind of wonderful blunders that made Partridge such a reliable and hilarious series, the film is also a smartly written satire on the state of Britain as a whole through the eyes of an aging presenter. Coogan charm to this tactless swine as Alan does horrible things and comes out blameless on the other side as if by magic.

Meaney is a perfect foil for Coogan, a gullible fool who has yet to see through Alan’s almost sociopathic facade. As Alan tries to cling to his D list celebrity, Pat carries the weight of life on his shoulders, something Alan hasn’t really experienced due to the lies and self adulation.

It’s British comedy at its best and a darn sight better than the widely anticipated but unremarkable The Worlds End thanks to an excellent script filled with jokes for everyone. As it turns out despite his years on the Bench, Alan Partridge is still the Alpha Papa.