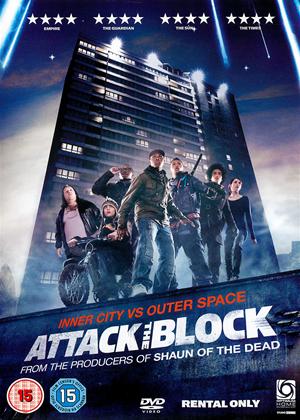 Reviews (2) of Attack the Block

Senseless and Moronic! - Attack the Block review by CS

Supported by the British Film Foundation and a host of other charitable arts organisations. This film really does look like a budget project for a group of art graduates. Set in a UK London housing block, the story line is so simple you could write it on the back of a postage stamp. Gang of nasty teenagers terrorising the neighbourhood, take on a group of invading aliens, win and become the heroes of the day! This film sends out such a bad message to young people because it suggests that no matter what you do, no matter how nasty you are, if you save the day (once), suddenly all your victims think you're their hero (not)! I get the impression that this film was made to send a message out to youth about changing their ways, but it fails miserably and instead just encourages young people to be more violent, in my opinion! If you are under 18 and have such limited use of the English language that every other word is a swear word or trendy teen speak (not so cool or trendy), then you will probably love this film. But once the pubic hair starts growing, you'll change your mind!!

This film is watchable - and I enjoyed watching it, whilst laughing at how absurd it all was and also how very politically correct (no doubt the setting and the ethnic diversity helped get the funding too). Good acting, all in all, too, especially from the character 'Pest' (Alex Esmail?)........... All in all, the silly story moves along in its cliched way - the USP of this film simply being the fact it's set on an awful 'sarf lundun' estate and most of the characters are black - and muggers or drug dealers: and there lies the central problem of this movie, whose ridiculous story can survive the cheapo special effects and the fluffy teddy bears - supposedly aliens - who want to kill them. The fact is that, having lived near an estate like this and put up with the kind of mugger scum who live there, I was very much on the side of the aliens and wanted all the kids who are the 'heroes' of this story to be ripped to shreds by the alien lifeforms. I cheered every time the aliens got someone!!!!............... Now, I notice that this movie is written and directed by Joe Cornish - the ex-public school boy from a stinking rich family - who, no doubt, finds all the multicoloured durg dealing people on hellhole estates like this terribly cool - so long as he can play at being 'street' and always return to his country pad. I've known a lot of white guys like this in London - such fun to play at being gangsta when one can go back to real life somewhere else eh?.................... Those of us from ordinary families who have had to put up with the crap from feral kids from estates like this would never, ever be able to sympathise withy any of them - because we've been mugged and attacked by them, as they ruin inner city areas and make people's lives a misery. Maybe a remake then? Shot from the side of the aliens - who all seem much more attractive than the drug dealing mugging scum from the estate? For real...and ting, blud. As Master Cornish would not doubt way in his Westminster School accent...

Night-time in South London, Sam (Jodie Whitaker), a nurse walks home from a tube station when she suddenly finds herself being victimized by a group of hooded young thugs. They want her money and the rest of her valuables. But the mugging-in-progress will be halted, thanks to some sort of meteor landing on Earth… which are really aliens invading a council estate! Such is the premise of ‘Attack the Block’, a British sci-fi fantasy-horror-comedy that is unafraid to mix genres to deliver social commentary and the funny to its audience.

Joe Cornish (half of the comedy duo ‘Adam and Joe’) directs his first feature-length film and it’s in the same vein as its producer Edgar Wright’s films such as ‘Hot Fuzz’ and ‘Shaun of the Dead’. Showcasing the unique styling of British comedy, Cornish manages to elicit oddball performances from its cast which also include Nick Frost as a drug dealer and Luke Treadway as a trustafarian who are about to expand their business. The kids playing thugs-turned-heroes – Moses, Pest, Dennis, Jerome and Biggz – are frightening at first then hilarious the next. They embody the scary-good qualities of street gang members and they go around terrorizing unsuspecting victims on their BMX bikes reminiscent of kids in hoodies on bikes in ‘E.T.’

On account of aliens invading an inner city with already built-in street gangs and drug peddlers, I just might have to say – You mad?! ‘Attack the Block’ makes a statement in a comical manner that aliens that intend to mess up an inner city will have to be messed up in return. Of course, in the movie the gangsters are teens but you can’t say they’re not as cunning and crafty as their adult counterparts. It is actually in this switch-up that you mine comedy gold in ‘Attack the Block’. But then again, you’re made to wonder: Can the good people of South London really band with the delinquents when it comes to an alien invasion?