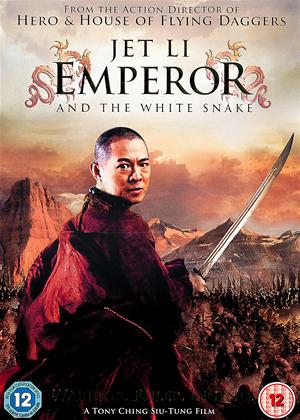 Rent other films like Emperor and the White Snake

Reviews of Emperor and the White Snake

After falling in love with the most beautiful woman he has ever seen a quiet herbalist begins to find his energy and intelligence draining; unbeknownst to him the woman is in fact a giant, evil and ancient snake who is using his love to slowly steal his soul.

Enter Jet Li, a vigilante sorcerer, who much kill the snake to break the spell.

Based on an ancient Chinese folk tale there is something about Sorcerer and the White Snake that is a bit unusual for a European viewer; whilst at the same time not fully indulging in the traditions of Chinese folk lore. Where Jet Li is at first heralded as the hero the change in direction when we discover the Snake has fallen in love with her poor herbalist and is willing to give up her powers for him leaves things a bit muddled and strange to those of us accustomed to the black and white, good verses evil of Disney fairy tales.

In many ways the film resembles epic Eastern fantasies that many will be familiar with, and those who have seen the original Chinese Ghost Story series will recognise the same skilled directorial style of Siu-Tung Ching who visually brings the story to life with grace and beauty. Unfortunately somewhere in the translation from page to screen (never mind from spoken Chinese to subtitled English) the tone and emotion of the story gets a little lost and a little warped, leaving the final production somewhat of a disappointment.