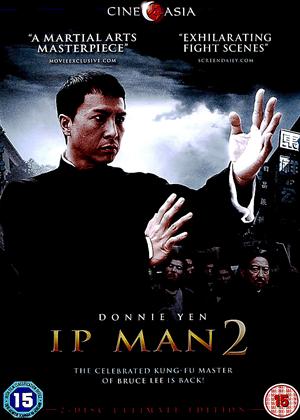 Sign up
Detective Dee: Mystery of the Phantom Flame

Ip Man is best known as the Hong Kong kung fu master who trained Bruce Lee, the martial arts actor. Ip Man 2 is the second pseudo-biographical film about the life and times of Ip Man. I describe it as 'pseudo' because great liberties with his life have been taken in this pair of films.

The first film, 'Ip Man' tells of Ip's life in Foshan, China, under Japanese occupation in the 1930-1940s during the 2nd Sino-Japanese war. Of the two films, 'Ip Man' is in my opinion the better and should definitely be viewed before 'Ip Man 2'. Although stylised – it's the nature of kung fu films – with fights between proponents of different martial art styles and a duel between Ip Man and the local Japanese commander (a baddie, of course) there is some character development. But it's along the lines of 'Ip Man good and gentle until provoked, Japanese bad'. At the end of the film, Ip Man is wounded by the Japanese and leaves Foshan for Hong Kong. In fact, he did not leave China until 1949 after the Communist takeover.

Anyway, the action in 'Ip Man 2' takes place in Hong Kong, where the impoverished Mr Ip tries to support his family by (of course) starting a martial arts school. First he has to assert his prowess against the local kung fu masters, then against the British, the then rulers of Hong Kong. And (of course) similar to the first film it's 'Ip Man good and gentle until provoked, British bad'.

I have to say that of its type it's pretty good, although some scenes are just silly – the battle against 50+ cleaver wielding locals using a pallet as a shield is worthy of a Jackie Chan film, and there is unnecessary wire work in the duel with Hung. However, the climactic fight against British boxer Taylor 'The Twister' Milos is pretty good stuff. Now, if only all the nasty, corrupt, upper class Brits weren't so stereotyped... 4/5 stars.