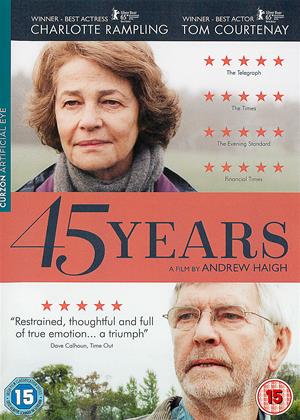 The Slowest Film Ever. - 45 Years review by CP Customer

We watched. We waited. We were sure the story would start sooner or later. Nope. Long shots of people walking across a field lasted for minutes? All the dialect was so slow and laboured that you are totally aware of the actors acting. You could have summed up the plot in 20 seconds. When it finished we looked at each other in disbelief.

I wanted to like this film - I really did.

But it has to be one of the most boring, slow, tedious films I have ever watched. Only 90 minutes but feels like 3 hours! Pretty countryside though, in Norfolk (not usually in films so that was a plus).

I suspect the problem is that the writer/director is pretending to be French - and this has all the hallmarks of one of those pretentious Gallic movies that art students and Derrida-drone academics so adore.

It's based on a short story. I wonder if it's French? That would explain why a British student goes to Switzerland (no-one ever did that, not from his social class! The hippy trail or Spain, maybe).

This probably works better on the page, frankly - and should have been a radio or TV drama really.

The lead actors are wasted AND very VERY irritating at times. I just did not believe in them. The older man who, despite being very academic, speaking fluent German and reading tomes on philosophy, works in a factory (this makes me think the story has French roots). The slightly younger woman - with a very odd accent - who apparently can afford a mansion on a teacher's pension. Other plot holes include: the convenient lack of children (why not adopt); the unreasonably resentful wife (as if anyone expects their partner not to have been in love with anyone else before marriage); the twee pregnancy subplot.

If you want to watch a deep and meaningful film about grief then watch something like Philomena. This 45 years film is pretentious and so in love with itself (it thinks it is SO clever and profound, but really is not).

The acting was good but any psychological depth is beyond me on this one. The married couple presented as morose and crestfallen and to have slid into a life of dull routine without any levity. I suspect they may have retired too early from their working lives and being without children, had lost their raison d'être. If they had had a more fulfilling lifestyle, I doubt the husband would have been hankering after a lost love in his distant past or the wife questioning and pursuing his wish to do so. The husband was very irritating and being so introspective about his past, was alianating his wife's affection. The movie was very slow and I did not like the inconclusive ending as it gave no indication of how the relationship would fare after the party. I should have liked to see the wife up sticks, find a more meaningful life and leave her husband to wallow.

This is a film in which almost nothing happens. It reminded me of the film "Lost in Translation", in which Bill Murray's character doesn't quite manage to have an affair with Scarlett Johansson's character, but was even more dull. I was waiting for the film to end with a massive bust-up between the main characters, but it just petered out. I must be a Philistine because critics seem to rate these kind of films very highly. As the most exciting visual moment is when a motor cruiser on the Norfolk Broads slowly passes the camera, the whole thing could have been performed as a radio play.

On the whole I enjoyed this movie. The performances from Rampling and Courtney were excellent. Is Rampling deserving of an Oscar for this, I guess we'll have to wait and see. I enjoyed the plot and development of the story on the whole; however I would have liked more from the post party, possibly developing this aspect of the narrative and showing how the aftermath, if at all, was dealt with by the two people in this relationship. I felt they could have developed Courtney's character's psychological grieving more, although I appreciate the implicit and teasing nature of the story line. On the whole if you are looking for a movie that demonstrates and questions implicit cultural values and relationships from a British perspective, focusing on non-communication and how this can fester, this is a movie for you. If you are looking for a barrel of laughs, then I'd stay clear.

I was sure it would get going but alas it did not and I had to stop watching it. Fail to understand the purpose of this film. One of the dullest films ever. Would not recommend it.

Although I liked the two lead actors' portrayals of the characters, this was a rambling, uninteresting story that didn't really go anywhere.

Great film - 45 Years review by AT

This film never gets going. I watched the film & couldn't believe how slow it was & found it hard to resist putting the DVDs on fast forward!

Must have been filmed on a tight budget.

A subtle experiment on the psychology of human minds, accompanied by its charming, often times humorous leads -- 45 Years is an honest, captivating, multi-layered, true piece of cinema art par excellence. Its aesthetics perfectly mirror its story, where powerful, evocative meaning is implied by lack of visible expression, and scenes so well-crafted to outshine even the best of works regarding the intricacy of the human condition. Avoiding this particular piece would certainly stand out as a cardinal sin on everyone’s portfolio.

45 Years’ masterful visual storytelling is a spectacle, a latent one, with some scenes that now give me a pleasurable sensation of fright when I better come to think of it. It’s a film that stamps its message deeply into a viewer’s heart (by all means) and stirs all pre-established harmony in one’s body: a rare achievement of films of any kind. This adaptation of author David Constantine’s short story manages to breathe life into a seemingly nothing-out-of-our-ordinary affair of grief, nostalgia and the existentialism of love (Kierkegaard also gets a mention). It’s bigger than life, by all means appropriate.

Director Andrew Haigh uses clever camera angles and simple cinematography to a stunning effect – all scenes, while holding aesthetical value, tell their own little story of importance. Each frame is carefully chosen to add to the emotional decadence of actor Charlotte Rampling’s character, which needless to say – the actress deserves the Oscar. Her performance is so convincing and relatable, that a single glimpse into the perspectives she holds adds uneasiness under the skin of an observer. Think how everything you knew in your life by far, love-related or otherwise, turns out to be shaped and molded by a person you hardly knew, maybe even a non-existing one. It’s a troubled thought, an existential conundrum that no one, least of all the contemplating observer, can answer it.

One of the probably most important questions regarding retrograde jealousy lurks somewhere beneath the layers of 45 Years: can one’s life past by without knowing it’s meaningless? A sole thought wakes unpleasant body sensations, channeled by Charlotte Rampling terrific performance. 45 Years plays like an insidious affair of loss, regret and acceptance. To top even that: the final frame will break the hearts of even the most adamant of people.

The film’s weakest elements are the ones with Geraldine James on screen, but even those greatly surpass your ordinary cookie-cutter, artificial, overly-sentimental Hollywood drama. Simply put: this film has everything going right for it, which is nice.

To better think of it -- 45 Days is the best character-driven drama in the last 10 years or so, no competition.