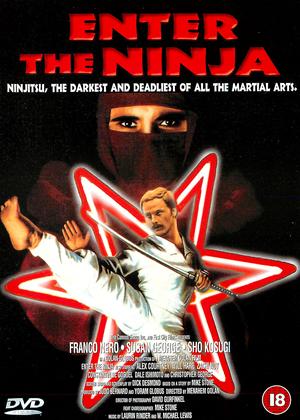 Reviews (1) of Enter the Ninja

Believe it or not, before this film was made, even the geekiest kidult didn't know what a ninja was unless he lived in Japan. Of course, like virtually all Cannon movies, it's both terrible and weirdly flawed at the most basic level, but it would be downright mean not to like it. Although it's 18-certificate ultra-violent, it's so goofy that none of the bloody mayhem is the least bit disturbing, since it obviously has no connection whatsoever with reality, and most of the acting is so dreadful that you don't for an instant consider these characters real enough to feel sympathy for them when they suffer and die.

Franco Nero, the original Django, is ludicrously miscast as the white man who is of course far better at ninjutsu than the Japanese people who invented it, and even when he isn't dressed in his ninja suit, he often wears a hat in an unsuccessful attempt to make it less obvious that all his really athletic moves are being done by a stunt double. And the scenes in which he removes his shirt make it very obvious indeed that his 40-year-old body may not exactly be flabby, but it's in no condition to perform the athletic feats he's supposed to be capable of. Shô Kosugi is rather more convincing as the bad guy, since he really can do his stuff while looking straight into the camera without a mask. I imagine that's why he had a much more prominent rôle in the sequels. And Susan George, a limited actress who took off most of her clothes and usually died horribly in numerous trashy movies from a slightly earlier era, is starting to develop a double chin, and conspicuously fails to strip off like she did in just about every previous movie she was in, so that we can't see how middle age is starting to creep up on her.

This is also the film which started the short-lived trend for good-guy ninjas to dress in white, even though that's clearly an incredibly stupid idea unless you're trying to be inconspicuous in a place like Antarctica (this movie is set almost entirely in the Philippines). But it's these absurdities that make it fun. "So bad it's good" is a much-abused concept, but it certainly applies here. Our hero, in a scene which "Raiders Of The Lost Ark" clearly took note of, pointlessly twirls bladed weapons just because he can, while two men with guns aimed straight at him simply stand and watch until he kills them. And that's not the silliest thing in the film. I'm not suggesting that this is high art, but hey, it's crazy, stupid fun! And sometimes that's all you want from a movie.