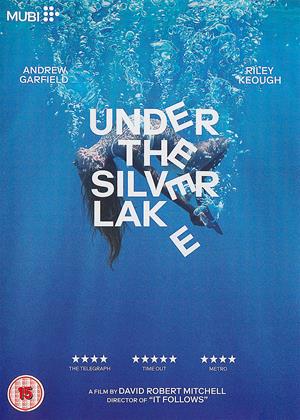 Reviews (3) of Under the Silver Lake

If you've never seen, or even heard of, a David Lynch movie, then perhaps you'll get something more out of this than I did. Because this feels like a love letter to him, his two most recent movies in particular (Inland Empire and Mulholland Drive). I love those movies but I didn't need to see a ersatz semi- stoner version of them.

You've got the same almost voyeuristic obsession over a female character, here in the form of Riley Keogh. Andrew Garfield's Sam meets her as she moves next door to him. You've got a cod-detective narrative... Keogh goes missing, causing Sam to seek her out in the uniquely weird LA combination of glamour and sinister situations. And to add to the surrealism so beloved of Lynch, Sam experiences increasingly violent and bizarre visions, partly inspired by a fugitive pet killer (reminiscent of the bunny head skit in Inland empire).

Andrew Garfield does his best to make his paper-thin character less creepy than he's written to be, but he doesn't completely succeed. Appealing as Garfield is, his character's extreme paranoia and apparently charming lack of basic hygiene seems at odds with his bedding of various women, in some rather eye rolling wish-fulfillment fantasies from writer-director David Robert Mitchell. The end result is a movie that has its moments of inspired lunacy for sure, but delivers little of the shocks, laughs, sexiness or mystery needed.

Why Are We Swimming In Pools On Roof Tops, When The Ocean Is Just Over There? - Under the Silver Lake review by BG

This is the kind of film that will divide viewers. Everyone has their own ideas and opinions, so that's fine. For those who like a straight narrative with neatly tied-up satisfying conclusions will probably not like Under the Silver Lake. Viewers who prefer a more unconventional, surreal approach they like to think about and work out all the metaphors, will appreciate it. With some striking imagery, the plot has a labyrinth structure where layabout Andrew Garfield is more concerned looking for his missing neighbour he hardly knows, than searching for work and paying his overdue rent. Mind you, she is quite a lush! In what at first appears to be a Shaggy Dog Story (with actual dead dogs), the film contains various elements including searching for hidden messages in songs, murder, paranoia, casual sex, subliminal advertising, film references, etc... The ultimate message appears to be along the lines of an existence in purgatory, giving up material values, and seeking a more spiritual path. There are several clues leading up to this, one example is the voyeur with the drone who spies on a lonely nice looking girl, and instead of the expected undressing, the camera zooms onto her face as she cries... So simply, this is the film you will relish and want to see again to catch any clues or ideas you may have missed first time round, or you'll become frustrated and feel like turning it off before the end.

What a weird film - Under the Silver Lake review by RT

This film started well and intriguing but became very strange as it progressed. Still not sure what happened at the end but it was entertaining enough. Acting throughout was very good by everyone involved.