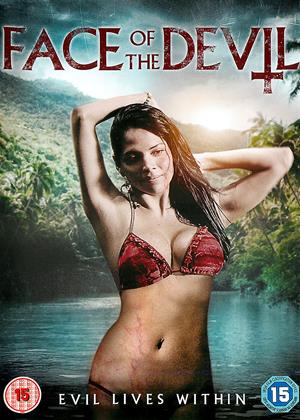 Synopsis:
Seven lively backpackers travel to the Peruvian Amazon, where they learn about the Tunche - a primeval spirit whose shrill whistle is an omen of impending death. The lush, exotic idyll becomes oppressive after sundown, and the doomed delinquents begin to wonder whether the Tunche is more than a creepy campfire yarn. Is there something nasty in the jungle - and if so, did sweet-natured Lucero and her rowdy friends bring it with them?
Actors:
Vania Accinelli, Sergio Gjurinovic, Vanessa Saba, Alexa Centurion, Maria Fernanda Valera, Nicolás Galindo, Carla Arriola, Guillermo Castañeda, Javier Valdez, Ismael Contreras
Directors:
Frank Pérez-Garland
Producers:
Varun Kumar Kapur, Gustavo Sánchez
Writers:
Vanessa Saba
Aka:
La Cara del Diablo
Studio:
Matchbox Films
Genres:
Horror
Countries:
Peru, Horror

Reviews (2) of Face of the Devil

Spoilers follow ... - Face of the Devil review by NP

A group of seven beautiful young people go on a sun-kissed jungle vacation, which means lots of pristine skin and pearly white teeth. With this being a Spanish production, if you can bare the sight of such perfection, these characters are unaffected by the swagger and posturing attitude that continues to blight many horror films of this nature: they’re likeable, and the relationships with each other are real and even appealing. Vania Accinelli is particularly appealing as Lucero, constantly plagued by bad dreams and memories of a childhood that suggests an unspecific demonic abuse at the hands of her mother. As a result, her father initially forbids her to go on the trip with her associates.

Also very good is Ismael Contreras as Encargado, the creepy-eyed owner of the picturesque location. Without ever over-playing, Contreras lets us know Encargado has secrets, and on this occasion appears to have unleashed more than he bargained for.

With no real gore to speak of (until perhaps, the final reel), this is a film about atmosphere rather than jump-scares. When horrible things happen to the characters, it isn’t dwelt upon – the fact is, you like these people and don’t want them to die. Director Frank Pérez-Garland ensures the rolling locations are both a paradise and a prison. I really enjoyed this. The story may have been done before, or at least variations of it, but at least here, it is approached in a refreshing way.

Just don't. - Face of the Devil review by TB

Really, just don't hire it. It really is, well, something complied in film school.

Why this 'Review' part of Cinema Paradiso requests, no demands, there must be between 100 and 4000 characters, I do not grasp, as this film does not deserve even 100 characters.