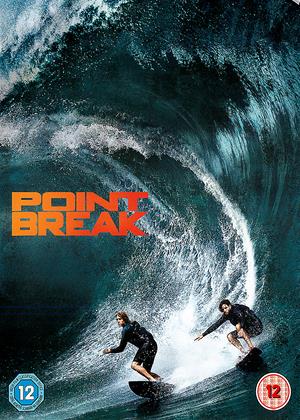 If you're an adrenalin junkie, or like me, wish you were brave enough to tackle extreme sports, this movie is just the ticket. Breathtaking stunts, amazing scenery and daredevil tricks that keep you on the edge of your seat. An average plot, but that's not really the objective. Saw it at the cinema - can't wait til it's released on dvd.

I found this re-make/re-imagining spectacular some of the visuals whether or not they were CGI enhanced is neither here nor there as the movie is very entertaining from start to finish. I would say that due to progression in film making the original is less breathtaking and if you would like to see action in a different vein then this is a movie for you.

I really enjoyed this remake of Point Break, it kept me interested enough from start to finish. Loads of stunts visual scenery . Pretty good story of a FBI recruit on his first case, he gets a bit too close too the ones he was supposed to be catching. Good film.

Cannot recall seeing the first film with K Reeves back in 90's. Folks say was better, in its day. This went along keeping interest throughout, so no bad thing.......

With a budget of $120 million, the remake of Point Break certainly doesn’t skimp on the stunts. Two men motorcycle across the narrow trails of a mountain. Two men skydive out of a plane as they as let loose large sums of money from their strapped blocks. Four men jump off a cliff and glide far too closely to the trees and ground. One man surfs through an insanely large wave in a violent storm. There is rarely any dialogue or cutting away from these extreme stunts, allowing all the footage to be put on display from multiple angles. It’s loudly mixed as well to hear all the force and pressure of nature working against these characters.

But eventually these scenes end, usually with the men shouting “WOO!” at surviving or screaming “NOOO!” when someone dies. And that’s when the painful flaws of this remake become very obvious. The undercover agent Johnny Utah (Luke Bracey) makes his way inside a group of extreme sports nuts committing crimes along their spiritual journey of stunts. Though they disperse money like Robin Hoods and kill anyone who gets in their way, their ultimate goal is to fulfill some eco sense of enlightenment by completing eight trials. All of this is in the name of feeling terrible about the environment. You know, while taking advantage of rich investors to finance their crusade with A-grade gear and parties of wine and loud music. Such is the plight of the first-world extreme athletes that aim to be closer to god.

Among the many major problems with this remake is that it relies on the crutch of nostalgia. Luke Bracey tries ever so hard to replicate Keanu Reeves in both the long hair and the dude-bro speech pattern. He’s even given the opportunity to replicate the iconic scene where he fires his pistol wildly into the sky, refusing to shoot his partner. Everything about Bracey’s performance screams of a pale carbon-copy that appears rather dated. How many extreme sports athletes in this day and age embody the California surfer vibe? I half-expected the female lead Teresa Palmer to read her dialogue in valley girl slang. I’m starting to wish she did given how little she has to do: she flirts with Johnny, spouts some exposition, makes out with Johnny and then dies. Not a scene more of her to make any of the relationship believable.

The ring-leader Bodhi (Edgar Ramirez) does his best to be blander than Johnny Utah. He speaks of trying to be closer to nature and how humans are destroying Earth, but only in the most generalized of statements and the most dry of deliveries. He’s about as vanilla of a villain as you’d expect for such a forgettable role. I can only hope that director Ericson Core hired all these actors because they do well for many of these physical stunts and wouldn’t have to rely on stuntmen for all the action scenes.

Considering how unknown most of these actors are, I’m surprised the director didn’t just cast the stunt people as leads. Stunt double Laurie Towner broke his jaw while performing the incredible surfing scenes. To think he risked his life so for a character that delivers such a dull performance by Luke Bracey. I doubt that Towner could have done any worse than Bracey, an actor who previously played the masked Cobra Commander in G.I. Joe: Retaliation.

This Point Break is all amazing stunts and absolutely no drama. There’s little reason to care about Johnny Utah’s plight from the loss of his partner in the beginning to the companionship he breeds with Bodhi by the end. No tension, no romance and not a care to be had. The only worth this movie has is its amazing spectacle of extreme sports which will certainly please patrons and athletes of this sports genre. But they’ll most likely find themselves fast-forwarding through the vanilla story to get to the visual treats.