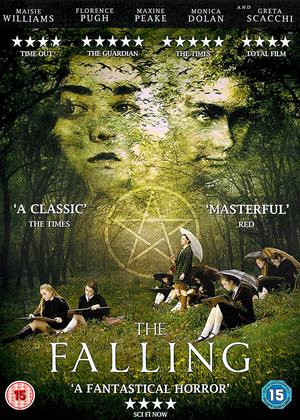 Reviews (7) of The Falling

'A' for production values, 'F' for coherence - The Falling review by WS

This is what might be termed an "experience" film - one to watch on the big screen if at all so you can be enthralled by the superb cinematography and historical atmosphere while overlooking the fact that narratively, it's a mess.

The idea of a mass outbreak of schoolgirls stumbling, fainting and convulsing for no apparent reason may not be completely preposterous - I heard of something similar in the 1990s called the Toronto Blessing. But the annoying thing is that in hinting at explanations for the outbreak it seems to nudge the viewer first towards one interpretation, then another. Mass psychosomatic illness brought on by unresolved grief? Extreme suggestibility? Something to do with hormones? Supernatural forces, such as in the scene when the students' watches all stop? Attention-seeking behaviour? I don't think a mystery drama necessarily has to tie up all the loose ends or spoon-feed solutions to audience, but flirting with different explanations in this way without any real resolution feels capricious, glib and dishonest.

The use of seemingly meaningful imagery is fine on the level of art for art's sake, but does it really move the story along or give us more insight into the characters? For instance, there's the repeated shot of the tree by the lake where the girls congregate. This is presumably meant to indicate that the girls are in touch with the forces of nature, which makes them . . . what? Stronger? More vulnerable to whatever it is that's making them faint all them time? Or just more female?

If that's not enough, in the last ten minutes we get a jarringly abrupt change of focus from teen group-bonding to familial dysfunction - almost if they’d decided at the last moment to turn it into a '60s version of Mike Leigh’s “Secrets and Lies”!

Premature death and bereavement, under-age sex, mother-daughter resentment, the individual versus group identity, mental illness . . . it couldn't be more overstuffed with ideas and issues if it tried. The film-makers evidently had plenty of ideas but apparently lacked the time, money or self-discipline to bring them to maturity, and the end result feels like an awkward mish-mash of social realism and fantasy.

The review posted by WS is spot on so I have little to add other than to say that thought that Maisie Williams put in an excellent, mature performance in the lead role and if that was her real voice, Florence Pugh is multi-talented.

I agree with the other reviewer saying that the review by WS is spot on.

I personally can't think of anything positive to add apart from the performances which are great. The rest is pointless and boring.

A lot of falling over (too much) and unresolved story which makes you wonder why you sat through it.

If you fancy a horror then don't bother.

Weird - The Falling review by SR

Strange film which didn't really go anywhere, maybe there was a deep meaning behind it all. However I must have missed it.

Who was this aimed at? - The Falling review by AL

This is far from being a horror or a decent art house film. I can't imagine an obvious audience or group this film is aimed at. It all seemed pointless, and more of a vehicle for the young actresses and creative team. The only positive thing I can come up with is that it looks good.

The Appalling, more like. - The Falling review by SM

Aimless, meandering, waste of time. The fainting in this film is so poorly portrayed it caps off a generally terrible film. The only positive is Peake's performance and that's brief.

I hate to give a negative review but I picked this film based on Florence Pugh's performance in the brilliant Lady Macbeth but as a result my wife now hates me.

This British film is state-funded by the BFI and the BBC, I think, and also the Lottery. AND SO it is obsessed with diversity and promoting (some may say overpromoting) female film directors.

The end result is a mess of a movie, pretentious and arty - it all feels like a student film, to be honest, and it felt so long and slow even though it was only 90 minutes.

All set in a girls' school and only 3 males in the entire film, to the diversity-worship of feminist box-tickers will be happy.

Based on some real life stories - of fainting of girls at school, dating from UK in the 1960s and 70s, so the writer has just stolen that and tried to write it all up as a mystical feminist drama - and failed. The plot gets muddled with every social issue you can think of chucked in (and behold, it is all the fault of a nasty wasty man!).

As others have said, the acting is good esp the lead girl. Music is a bit random and done by Tracey Thorn, thereby nailing its arty state-funded colours to its rather limp mast.

All in all it is a MEH movie. Passes the time and then can be forgotten.