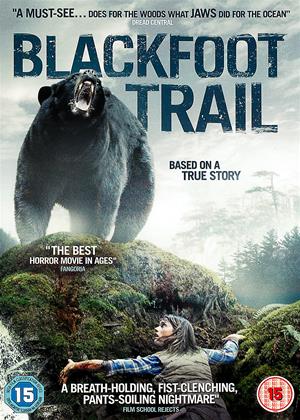 Synopsis:
Urbanite boyfriend and girlfriend Alex (Jeff Roop) and Jenn (Missy Peregrym) head to the Canadian wild for a romantic getaway. Having visited the woods several times in his life, an overconfident Alex shuns bringing a map or mobile phone and is determined to veer away from the hiking trails into the true wilderness along the secluded Blackfoot Trail. His blind ambition grows stronger when a cocky intruder (Eric Balfour) insinuates Alex is just another soft yuppie pretending to know the area. Before they know it, Alex and Jeff find themselves lost and even worse, they end up stumbling into the hunting grounds of a black bear with a voracious appetite.
Actors:
Missy Peregrym, Eric Balfour, Jeff Roop, Nicholas Campbell
Directors:
Adam MacDonald
Producers:
Thomas Michael
Writers:
Adam MacDonald
Aka:
Backcountry
Studio:
4Front Films
Genres:
Drama, Horror, Thrillers
Countries:
Canada

I enjoyed this from start to finish , based on true story of boyfriend and girlfriend go hiking and camping that ends up being a challenge to get back alive. Good thriller.

A young couple Alex and Jenn (Jeff Roop and Missy Peregrym, turning in excellent performances) decide to backpack through the Canadian forests. They are sprightly, funny and highly likeable. So much so that when they are joined by a third, Brad (Eric Balfour), he is immediately unwelcome, no matter how friendly he seems to be. And friendly he is, though there’s no denying he has a darker side, which occasionally manifests in their conversations. His appearance some way into the film makes us pretty sure we’ll see him again later …

The other player here is Nicholas Campbell who is great in the small role of the grouchy Ranger-on-the-make.

Likeable though Alex seems, it is difficult not to resent him when he ‘reasonably’ insists they continue their trek despite strange noises at night and other unnerving occurrences – we, the audience, know Jenn is bound to be right in wanting to go home, and Alex’s foolhardy refusal to take a map guarantees trouble.

In fact, the more we get to know Alex, the less likeable he becomes. When he reveals his bullheadedness extends also to relieving Jenn of her mobile phone and leaving it in the car, and then succeeds in getting them both lost, our sympathies lie 100% with his partner. Of course, being lost with no way of communication with the outside world is integral to stories of this nature, and here is made entirely believable due to Alex’s need to prove himself by turning down any offers of help. This allows Jenn to move centre stage and salvage a situation that descends from Very Bad to Even Worse, when they unknowingly wander into black bear country and become of great interest to a large, predatory killer. When Alex is frantically looking for his axe to ward off an approaching bear, I commend Jenn for resisting the temptation to say, “Maybe it’s with my phone.”

We wait a long time for the attacks to come, but when they do, they are expertly handled and very effective. And more gory than we expect. This is an extraordinary debut from writer/director Adam MacDonald and I hope he has a long a fruitful career, because this a film with only four cast members, is extremely easy to enjoy. It should be said, however, that the ending is slightly disappointing, although the atmospheric use of the incredible location – crisp, taught camera angles; at one point, the swaying of the trees has an almost hallucinatory effect – ease the shortcomings due to a lack of proper pay-off.