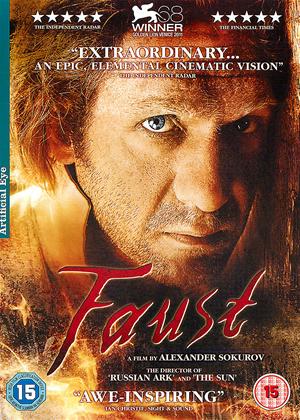 As Bonkers as it is Boring... - Faust review by PV

I really wanted to like this film. I loved the story of Faustus, and have seen many versions on stage (Marlowe's Faustus) and is films. But this film was just 2 things: 1) bonkers; 2) boring. So yes, there was surreal arty camerawork.

Yes, the scenery and acting were fine. This is a German/Russian/Czech co-production I think, and was made at the Prague Barrandov studios - so we know that is quality. But really, this goes on and on and on, with typically pretentious arty European faffing about, before ending as confusingly as it began. I think I ordered this because it was recommended by a critic or was nominated for a prize at Cannes or somewhere. All I can say is: avoid unless you have the patience of a saint - though if you look arty films then you'll be in heaven. One for the most pretenious poseur film studies students... 1.5 stars.

For a REALLY great German film, rent out The Wave.