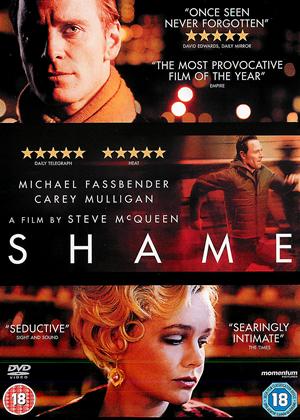 The film seems to have no real plot and just too much sex it makes for uncomfortable viewing.I did not really get what the whole thing was really about

Best film of the year - Shame review by VT

Shame is a powerful, moving and deeply compassionate film about damaged, dissociated people, with stunning performances from Michael Fassbender and Carey Mulligan. "We're not bad people," says Sissy, "we just came from a bad place."

I was wary of another film by Steve McQueen after Hunger which was an emotionally detached study of the Irish Republican Bobby Sands and his last days in prison on hunger strike.

Shame is just as well crafted and beautifully shot as Hunger but far more humane, both in the vulnerability Carey Mulligan brings to the part of Sissy and the depth of Fassbender's performance.

This film is about running away from the traumas of the past - which are not disclosed in the narrative - and the tragedy of addiction.

This is what isn't ent being said - Shame review by AW

Despite the cast, a disappointing movie. Until you realise why what's happening can't be spoken in words.

This is a tragic and wretched story of a man who is unable to commit to any relationship because he can't have the one woman he wants. The woman who wants him too, but can't have him either, despite her best efforts.

Because they are brother and sister.

He tries to satisfy his desires any which way he can but nothing works. She eventually makes a wretched suicide attempt.

A weak storyline and characters who are uniformly unsympathetic made for a pretty tedious film. No redeeming features really.

This film was SO boring that the 2 people I was watching it with were yawning so much they had to go go to bed after 10 minutes. Me - I stayed with it. Well, that's an hour and a half of my life I'll never get back!

This film is AWFUL. It is all about an emotionally detached bloke in Noo Yoik (though of course I am sure the filmmakers were not trying to appeal to the US market...) who watches porn a lot and whose sister comes to stay. Various uninteresting things happens and then it ends. Very few words are spoken (this is seen as deep and meaningful and profound, apparently, in arty theatre circles) - but this film is not profound at all. It is just dull, forgettable, and seems to be desperately hoping to shock and get publoicity that way (sadly, that worked, which is why I heard of it).

This is a lesson in why NOT to give pretentious Saachi-slobbering artists a film camera. Stick to the paintbox, eh. For all our sakes.

Half a star for the acting - no stars for the writing or the whole thing.

One to save for when you invite your hated extended family round and want to get rid of them forever.

Difficult to describe without giving too much away, good performances by both leads, thought-provoking and stylish.

From the maker of 2008’s painfully emphatic Hunger comes the story of Brandon (Michael Fassbender) a sex addict whose sordid daily routine is interrupted by the arrival of his needy and troubled sister Sissy (Carey Mulligan).

Though the narrative for Shame is what attracted much of the press attention it is by far the secondary feature to this movie, overshadowed entirely by the characters and actor’s performances.

Fassbender’s performance is faultless, he completely engulfs the screen in a way that only serves to reflect the way in which his debauched sexual addiction has overtaken him; as a character he is unpleasant and unnerving, yet there are moments in which you see a genuine desire for a connection that goes beyond the physical, his seemingly pleasant dinner date with a work colleague (Nicole Baharie) is touched with an almost tragic but unmistakably contemporary innocence that, when compared to his other relationships, is quite poignant.

Mulligan is also an absolute star, giving what many are calling her best performance since the Oscar Nominated An Education – her depiction of Sissy, the selfish and emotionally indulgent sister is edged with an almost indefinable vulnerability that has a marked effect on her brother.

There is not a single moment in this movie that is easy to watch however, this is really challenging stuff that is likely to make many an audience member too uncomfortable to complete their viewing; the rewards for those who do however are honestly quite immense.