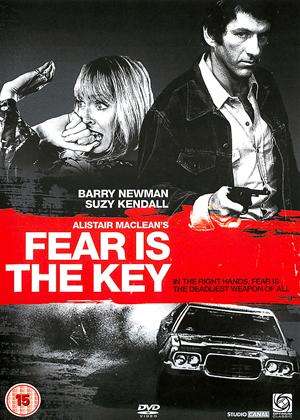 Synopsis:
A classic British thriller from 1972, Fear Is The Key is based on the bestselling novel by Alistair MacLean. Barry Newman is John Talbot, a man whose life erupts into tragedy when he hears his brother's voice on the radio of an aeroplane carrying his family, telling him that a plane is diving on them, firing. Embarking on an elaborate revenge mission, Talbot finds himself pursued by the police and kidnappers alike. His destiny soon becomes entangled with the daughter of a multi-millionaire, as trapped together in a heavily guarded mansion, they begin a frantic search for the truth.
Actors:
Barry Newman, Suzy Kendall, John Vernon, Dolph Sweet, Ben Kingsley, Ray McAnally, Peter Marinker, Elliott Sullivan, Roland Brand, Tony Anholt
Directors:
Michael Tuchner
Voiced By:
Marc Smith
Writers:
Alistair MacLean, Robert Carrington
Studio:
Optimum
Genres:
British Films, Classics, Thrillers
Countries:
UK

Reviews (1) of Fear is the Key

Son of a gun, not much fun on the bayou... - Fear is the Key review by Count Otto Black

I don't know if this film was ever considered a "classic" as the synopsis claims, but I suspect it wasn't. Certainly by today's standards, even giving it the leeway you have to with movies over 40 years old, it hasn't aged well; "The French Connection" it ain't!

B-list action hero Barry Newman (you may remember him from "Vanishing Point", but as memorable starring rôles go, that's about it) is a convincing tough guy, but in a deeply uninteresting way, as befits a man motivated so entirely by revenge that he seems to have no life whatsoever outside his mission, even in the latter part of the film where his character is supposed to reveal hidden depths. Suzy Kendall, as you might have guessed from the DVD cover artwork, has very little to do except scream; the chemistry between her and the hero is so non-existent that the script doesn't bother to include the normally obligatory romance. It's true she warms to him slightly as the film progresses, but maybe that's because every other man in her life who isn't her father is a psychopath. Talking of which, Royale the Mafia hit-man is such a stereotype that I didn't notice until the closing credits that he was played by Ben Kingsley.

It's also oddly lacking in action. After an opening sequence consisting mainly of a lackluster car-chase that goes on far too long and has only one decent stunt (and which looks suspiciously like a mini-remake of "Vanishing Point" to remind us why the presence of Barry Newman is supposed to be a big deal), the "action" mostly consists of our hero sneaking around hiding from the baddies, apart from a couple of desultory fist-fights and a few deaths, only two of which we actually see. The climax, despite being genuinely nasty (it's definitely NOT recommended viewing for claustrophobics!) and featuring the best acting in the movie, is almost completely static, and basically consists of a few men having a bad time while waiting to see who cracks first.

And of course there's the story. You know it's a bad thriller when there isn't enough happening to distract you from noticing gigantic plot-holes. The hero wants revenge, and the baddies want a Macguffin which, in today's money, is worth nearly half a billion dollars, but the cops seem to be doing everything in the wrong order, using methods so illegal that they're in more trouble than the criminals if it ever comes to court! And although the howlingly implausible string of coincidences which set up the plot later turn out to be part of something a lot more subtle than we at first thought, how stupid must those villains be not to notice that certain convenient turns of events are less likely than winning the lottery? Thrillers are, by definition, supposed to thrill. This one doesn't, and I'm not convinced it ever did.