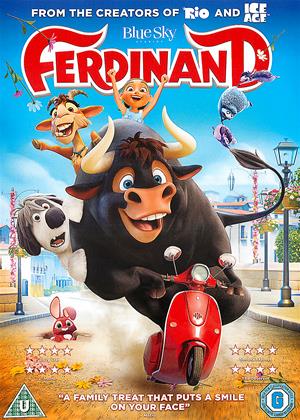 I have to admit I had never ever even heard of the children's book this comes from BUT it is American and was published in 1936, so maybe that's why. Set in Spain and with an anti-violence message, which may well have in mind the Spanish Civil War of the time.

I'd love to know how true this animated movie is to that book really - I suspect the film-makers have added huge dollops of 'political correctness' and upped the madcap car chases etc to please modern audiences with their goldfish attention spans. Which may well be a shame because those are the weaker parts of the film.

I did like the character and the general story, and the animation is fun - especially the German show horses! The 3 hedgehogs are not that memorable - and viewers should watch till after the end credits to see a scene with them which concerns the absent 'Tres'.

The movie decides not to confront the reality of what happens to bulls in Spanish bull rings by actually showing any deaths though - which may be a bit cowardly. Beef comes from dead animals, after all, and kids should know that. But this film backs away from that reality - always.

The new songs are without exception AWFUL - though some standards are used (such as the Jagger-Richards composition I'm Free).

I hated the madcap car chases etc - and the first half of this film is way superior to the second half, though the ending satisfies.

A different animation - Ferdinand review by HE

This was a refreshing change from the usual animation films around. Strong characters, good plot and an unexpected setting in southerm Spain. Quite strong emotionally for a U? I would not think it suitable for very young children. I thought it extremely clever to have the bull and the matador change roles in the bull ring to get the message across and the bull in a china shop scene was marvellous. Spoiled a bit by the strong American accents of some of the characters. I expected to be bored but was gripped.