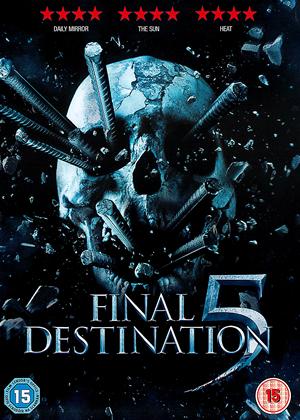 Want to cheat Death? If you’re one of the characters in a ‘Final Destination’ movie, you’re in bad luck as the wheels of death are churning and if you’re ready for more gore, watch on.

‘Final Destination’ movies always start off with the central character having a deathly premonition. This time in ‘Final Destination 5’, its actor Nicholas D’Agosto who becomes clairvoyant and he manages to save his paper-plant co-workers from a bridge collapse. For ‘Final Destination’ fans, you know what happens next. It seems the number one rule in these movies is this: You see dead people, leave them dead. Don’t be a hero… or you’re next! From cheating death, the consequences are dire and in a domino effect of people getting hacked off one by one, ‘Final Destination 5’ officially enters the decade-old franchise.

To satiate the ‘Final Destination’ boredom, a new plot twist is introduced – would you believe it? Should you want to cheat death altogether, you should murder other people to buy you more time on earth. Now THAT is a game changer. Characters do practice this new trade-off to live but not so much. It would have been better if the movie explored this fully. Hopefully in ‘Final Destination 6’… maybe? The repercussion of murder isn’t exactly flowery, if you know what I mean.

Just because it has a brand that says ‘Final Destination’ doesn’t mean it can’t be viewed with fresh eyes. The movie is also rendered in both regular and 3-D. With every gruesome death shown on screen, you’re now given a chance to see it in gut-busting 3-D! How you can eat and digest your popcorn after all that gore is your business.

For horror-slasher-disaster movie fans, film does not disappoint. Cheaply-made but not cheap on the blood and gore, ‘Final Destination’ movies is a money-making franchise that can’t be beat. You have to applaud them for having a horror villain in Death – without having to show how he looks like. A clever and scarier technique worth noting and applauding them for.