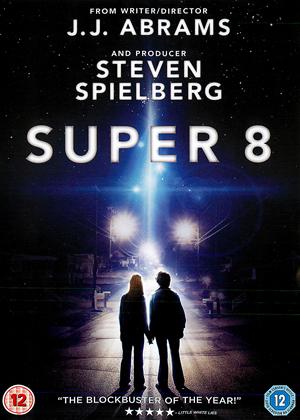 First off, beware of some other reviews on here which contain some minor spoilers.

Not ground-breakingly original, Super 8 is a mutant hybrid of ET, Cloverfield, The Goonies, and District 9. I'm struggling to come up with a reason that this could be a bad thing. Given Spielberg's involvement, there is a tendency to get drawn into cringing American sentimentality, particularly in the slightly rushed denouement, but generally it's excellently paced, brilliantly noisy, has some entertaining set-pieces, a decent splash of humour and is excellent fun on the whole.

It's a kids' film essentially, but presented in a grown up manner without being patronising or condescending, much like the aforementioned ET and The Goonies. It's probably not as good as these two, but it's not trying to compete. Kids will love it, adults should get plenty out of it, as long as the weight of the world hasn't crushed their spirit so much that they've forgotten what it was like to be 12 years old and in a whole world of trouble.

I was quite looking forward to seeing this film, but sadly like so many Spielberg films of the recent past, it failed to live up to the hype and expectations. In effect this is a 50's Sci-Fi Creature Feature, simply re-hashed for today! You see little of the creature and what you do see is unclear, muddy and confused, even when you finally get to see it. The CGI is poor and fails to make anything of the creature itself. The script is average, as is the acting, direction, effects etc. basically this film is a hash of so many other films that have gone before. It felt like a mix of Alien, ET, Cloverfield, War of the Worlds, in fact too many other films, so much so that nothing really stood out for me as being original, new or interesting. Many elements were irrelevant to the film, such as the love interest between the very young boy and an older girl, which I felt was irrelevant to the storyline. None of the characters had any strength or depth to them and the film struggled to build on those characters whilst at the same time creating a flow with the action. A good Sunday afternoon film to watch with the family, but in all a real disappointment!!

This movie is fun to watch, but it is utterly spoilt by the Hollywood desire (as personified by Spielburg and JJ Abrams) to make everything mawkishly sentimental. So here we have a motherless kid, a girl he fancies whose dad hates him, conflict with his own father - and, laughingly, a scene where a 13 year old boy persuades an alien moster who feasts on human flesh not to eat him but instead 'go home' (like the super-intelligent alien hasn't already thought of that!). Worst of all is the typical Hollywood need to send the main character on 'a journey' where, at the end, he and we will have learnt something - usually that 'lurve' is kinda cool, and we should all hug eachother and cry, and that we have to 'let go and move on' (that is done literally here)'. Didactic lecturing is irritating - but maybe the Yanks love it - they're used to it in church, one supposes. Ho hum...................................... The CGI scenes are boringly effective. This is set in 1979 but not the 1979 I knew - no-one had a super 8 camera or made films then because it was all just so expensive (maybe in the US though). Add to that some songs on the soundtrach which were not hits in the UK and there is no real tug of nostalgia for Brits here either.............. But all in all, I enjoyed this - not to bad, but the second half descends into Oprah territory. The movie would have been better without the teen love interest really. ET is the template here. This is Cloverfield (also JJ Abrams) remade for little kids - and also their nostalgia-seeking 'moms and dads'.