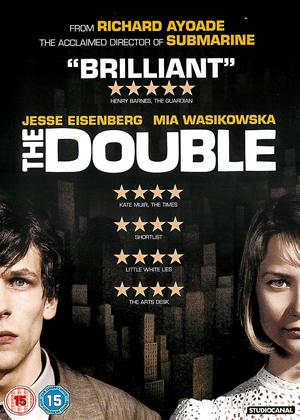 Reviews (7) of The Double

The worst film of the year - The Double review by PV

This film is terrible: boring, dull, confusing, pretentious, and a waste of the acting talent on show. I like Jesse Eisenberg and no doubt he wants some arty actorly kudos and status from starring in an arty film. But but but...

I like arty movies - I like films which do not rely on Hollywood tropes and special effects.

But really, this pretentious and over-rated film is the worst film I have seen this year - maybe the worst in 3 years.

I know hipsters will praise anything this director does, because he is trendy and so an 'emperor's clothes' effect takes place.

But I have to be honest - this film really is dull and up itself - and is, frankly, boring to watch.

It thinks it is really clever - and is trying hard to be Gilliam's Brazil in a steam punk way. And BOY is it trying! I struggled to the end and wished I'd turned it off after half an hour.

Only watch if you like this sort of thing...

I would recommend reading the book where this story came from though - - because this film is evidence, if more were needed, that some books and stories on the page just do not translate well onto the screen.

Disappointment an understatement - The Double review by CP Customer

PV has summed this film up perfectly I only wish I had read his/her review before renting, atrocious!

Can't please everyone... - The Double review by Schrödinger's Cake

Contrary to the prior reviews of this film, my daughter and I sat through the entirety, and as a rule we're not faint hearted when it comes to bailing out on a film midway through. In that regard, I would say that it is a long way from the worst film I have seen this year, and if it holds this acclaimed position for someone, then I suspect that they really could be trying harder: there is after all a lot of insipid tosh in the running for that prize.

As to the work itself: if you took an episode of Dr Who and glued it to Alfred Hitchcock, it would feel a lot like this film does. A bit weird and awkward, but reasonably entertaining none-the-less.

The gem is of course Jesse Eisenberg, but you knew that already.

Orwellian dystopia - The Double review by AM

I find it odd that no reviewer thus far has cited Orwell or Kafka, for the entire set-up seemed to me to be a Kafka style plot set in a 1984-style society. The set design I really liked, borrowing from the 1950's through to the 1980's. I was absorbed the film throughout, so yes, I enjoyed it. Deep-down, I can't shake the feeling that it wasn't quite as good it hoped to be. But I'd rather watch this than standard Hollywood fodder.

I must track down the book.

Dark, grim and not entertaining - The Double review by Old Devonian

Dark and intriguing, but not sufficiently intriguing for me to want to watch beyond 30 minutes. Disappointed. Tomatometer had a strong rating and other reviews (not here but elsewhere) were strong. It must be me, but seeing other Cinema Paradiso reviews here, I am pleased to see that I am not alone

Not bad, but not great - a little long winded in fact - The Double review by JR

I'm not adverse to watching films that require usage of the old grey matter, and Jesse Eisenberg is as always good in this film. Mia Wasikowska also puts a good performance in on this film. But unfortunately, it wasn't really likeable in anyway to me, it left me feeling a bit cold. It was certainly strange, but then I expected that from the book on which it was based. But for some reason it reminded me a bit of Terry Gilliam's Brazil, not in the story, and certainly not from the sets, but partially in the way it was presented. I normally stick with a film, but found it a bit too long winded, so didn't really enjoy it. However would accept it might appeal to others more, hence the rating.

A waste of subscription money - The Double review by BE

I can't think why I hired this one. Stupid, dull and boring. . Half an hour of it was too much. Sorry. No stars

Films like The Double really return us to the roots of cinema and some of the filmmaking that has disappeared recently in favour of fast cars and big explosions but films like this remind us that there is a different kind of film, the one where maybe, just maybe, everything won’t be all right at the end. If Hitchcock were watching he would undoubtedly like The Double

The film follows Simon (Jesse Eisenberg), a seemingly normal guy who finds his life upended when James (also Eisenberg) a man with his exact appearance begins working in the same building. However James is different, he is outspoken and seductive and begins to become more popular than Simon forcing these two into a dangerous situation with Hannah (Mia Wasikowska), Simon’s friend stuck in the middle.

Richard Ayoade has crafted a unique film that calls on old movie ideas but presents them in a whole new light making the films oftentimes dubious tale seem that much more enticing.Simon’s troubles seem real and gut wrenching as Ayoade displays them with the same visual flair he used in his debut film Submarine.

The film has some genuine stakes to get behind and Simon and James’ dual relationships with Hannah are both touching and disturbed. The film twists everything about Simon’s life and really gets you to wondering what happens if everything isn’t alright in the end, what if James really is better for being badder or if the world is just trying to punish some people.

However the film bases its foundation on Eisenberg and he is excellent in the dual role designing each of them individually with different tics and mannerisms to really give the story real creedence. Supported by the equally talented Wasikowska, this is top notch filmmaking and an impressive follow up to an equally wonderful start