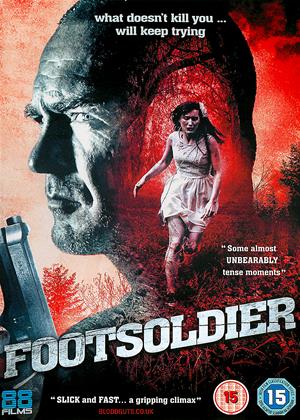 Thom (Jay Sutherland) is very attracted to Stacey (Helen Crevel), but she is in denial about this. Why else would he drive her all the way from London to the peak district for a wedding he isn’t even invited to? It’s all a bit unfair on Thom, but not as unfair as the fact that he’s accidently shot by a recently released ex-prisoner who is showing his son how to hunt deer on private land.

Realising there’s more than a chance of him going back to Her Majesty’s Pleasure as a result of this, the miscreant Weaver (Andrew Coughlan) intends to make amends by hunting Stacey, who is the only one who could engineer his downfall.

This is a solid, steadily paced thriller featuring some terrific scenery, a good line in plot detail (the ongoing notion of Stacey’s perfume giving her presence away, the lack of driving knowledge that impedes her getaway) and some occasionally lacklustre acting. Crevel overplays some of her earlier scenes, whilst villainous Coughlan underplays some of his.

Horror film idiocy, of course, takes a hold. Hunted through the night by a wild man with a gun, Stacey finds a deserted building, which she sneaks inside. Does she shut the door behind her? You’d think so, but no.

I enjoyed this a lot. ‘Footsoldier’ doesn’t set out to change the world, operates within its budget and has plenty of twists in the story to stop it ever becoming stale. There’s a moment when Stacey pulls out Thom’s wallet from her pocket, whilst taking a rest in the woodlands some way through her ordeal. In it, she finds a snapshot of her and Thom together, and breaks down. It’s a good, touching moment in amidst the relentless chase.