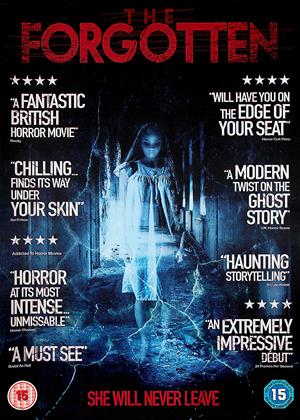 Reviews (2) of The Forgotten

This is a really enjoyable slow-burning ghost story, which utilises elements I really like. An abandoned tower-block, familiar surroundings given a very sinister leaning, social decay, understated performances and no reliance on special effects. Instead, the story – a not totally original one, involving the spirit of a murderer inhabiting a derelict building – is leisurely paced, letting us into the lives, strengths and weaknesses of the characters before placing them into convincingly staged dark jeopardy.

Elarica Johnson plays Carmen, initially hardened and distant; Clem Tibber plays Timmy, a sensitive loner living in a rough world; Shaun Dingwall plays his father Mark, forever up to no good; Lyndsey Marshal is Timmy’s mum Sarah, who is either mad, or the sanest one of them all. One thing many of the players have in common is their incipient monosyllabic, basic communication, as if the act of speaking is a weakness that needs to be completed as quickly as possible. The jerky secrecy of their every brief conversation eventually gives way to a more comfortable discourse, as familiarity sets in – but with Timmy especially, it was difficult to tell if he is played by a stilted actor, or he’s very convincingly playing a social inadequate (or rather an over-adequate in a world in which he does not fit in).

Another factor in Timmy’s shyness is his guilty talent – he is a proficient sketcher. His picture of Carmen, with whom he strikes a very poignant friendship, is used very well in the deliberately muddy finale. It is this ‘muddiness’ that helps make the story’s resolution lift the film up beyond even its own impressive earlier stages. The frustration of not knowing – and the characters not knowing – what has happened to Carmen reminds us how sensitively the character is played, and the sadness outlives the horror. As Carmen mellows, Mark becomes darker, with dire consequences.

Many of the events take place in near silence, with little more than the ever present low moan of night breeze echoing through the ruined corridors. This is a tremendous exercise in minimalism and intimacy, and works really well on both levels.

So good that I've forgotten it. - The Forgotten review by LC

This is a slow film which doesn't get any better. The relationship between Timmy and his father is quite interesting at first and you are waiting for the tension to build, but the film focuses more on their relationship than the goings on in the flat.

I was really quite disappointed with this. Calling it a horror is taking liberties and I think that is what disappointed me, because I was truly expecting a good scary film and it just wasn't. So long as you bear that in mind then you might like it for the character development.

The ending - and I'm not going to spoil it for you - is also a letdown. I didn't understand it and it felt like a cop out. Completely unrealistic.

This is a forgettable film.