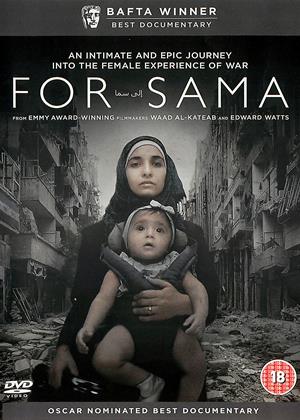 Synopsis:
"For Sama" is both an intimate and epic journey into the female experience of war. A love letter from a young mother to her daughter, the film tells the story of Waad al-Kateab's life through five years of the uprising in Aleppo, Syria as she falls in love, gets married and gives birth to Sama, all while cataclysmic conflict rises around her. Her camera captures incredible stories of loss, laughter and survival as Waad wrestles with an impossible choice - whether or not to flee the city to protect her daughter's life, when leaving means abandoning the struggle for freedom for which she has already sacrificed so much.
Actors:
Waad Al-Khateab, Hamza Al-Khateab, Sama Al-Khateab
Directors:
Waad Al-Khateab, Edward Watts
Producers:
Waad al-Kateab
Others:
Edward Watts, Waad al-Kateab
Studio:
Channel 4
Genres:
Documentary, Special Interest
Awards:

The first review on here, by "PV" is simply ignorant.

At no point in 'For Sama' is there any endorsement of Islamic fundamentalism in general or of ISIL in particular. We see the beginnings of the opposition to the Assad regime during the Arab Spring. ISIL did not hi-jack the freedom movement in Aleppo: they were present as one of many anti-Assad groups but chose to leave early on in order to help set up their disastrous caliphate.

It's a shame that such an excellent documentary should be the subject of such an ignorant attack by PV.

This is above all else a timeless document of humane values fighting to survive in the most extreme conditions of inhumanity. It puts the focus where it should be, on the children irreparably damaged by war and sectarian violence.

The honest self-questioning by Waad al-Kateab gives the film an ongoing resonance.

A passionate, powerful, heart-breaking documentary that doesn't pull its punches. It conveys in horrible detail the anguish faced by those who chose to stay behind in Aleppo and endure constant bombardment (cluster bombs, barrel bombs etc etc) from Assad's regime and his Russian allies. You constantly see helicopters lurking overhead, knowing they will be dropping some horrible explosive device onto the innocent men, women and children below (clearly no ground-air defence whatsoever) but not knowing onto whose apartment/hospital it will fall. You learn how the regime deliberately targeted hospitals to reduce morale and that the only reason for the survival of the second hospital created by the director's doctor husband was that it was makeshift and appeared on no map. You see the incredible courage of those who stayed behind - particularly of the director and her husband - and feel shame at the inaction of our government and others in responding to these atrocities. A film that you are unlikely ever to forget - and neither should you.

For Sama - For Sama review by CB

Be warned this is hard to watch in some parts, with bombs exploding and both the dead and dying in plain view, including children, so not for the faint hearted.

The complex politics is only touched on in passing, but it will give you insight into the Syrian conflict and how it played out for those actually there.

And help you see where the refugees came from, and why they had to flee.

It deserved all the awards it got.

not sure what I'm seeing - For Sama review by SG

I watched the film in the hope of learning something about this terrible conflict.

That wasn't part of the makers' intention though. Certainly it showed terrible suffering, particularly that of children, but I know Channel 4 (as they do so often) wanted me to see all this as a clear case of evil perpetrated against blameless innocents. That may be the case but with no explanatory context I felt dissatisfied.

Will certainly need to read around this to find out more concerning the influences and interests involved.

If you are squeamish, do not watch this docu-diary.  It pulls no punches and shows things that conventional documentaries and newsreels wouldn't dare.  But despite the desperate conditions endured, the human spirit shines through, and so there is hope.  There is also courage and resilience.  It will probably anger you to see "mans's inhumanity to man".  Or it should.

Unforgettable - For Sama review by kw

Extremely powerful, shocking and heartbreaking film. Dreadfully sad, but ultimately uplifting, quite unique. I've never watched a film that so made me want to take action.

I would have given this film 4 stars - because it is remarkable, filmed live during the war in Syria in Aleppo.

However, I was angered by the utter bias. The narrator makes the claim the Islamists who supposedly highjacked the revolution (though many started the uprising) were better then the regime. OH REALLY? I suggest Googling Islamic State and see what they did in the places they ruled which included executing people, chucking gays off buildings to kill them, crucifying people and worse. Palmyra is where the Islamofascist Islamic State smashed up old ruins and statues because Islamists believe in doing that - as they did in Afghanistan with the Buddhas and as Saudi Arabian regime destroys all old tombs of Islam.

Fact is, we in the West should have negotiated with Assad - not supported Islamists over there who are cut from the same cloth as the Islamist terrorists who kill people over here and in the West! These are not modern democratic people. The cities which have been ruined like Homs and Aleppo are like that because of Islamist uprisings.

So this is not like people overthrowing a regime as with the USSR and replacing it with liberal democracy. Yes, Assad is a dictator but arguably better than Islamic State - and chaos as in Syria and Libya is the worst of all worlds. Egypt has rejected Islamism.

So that bias spoils this film, which is shocking in places.

It could have been so much better, but no-one who believes in modern liberal democracy can possibly support Islamist uprisings.