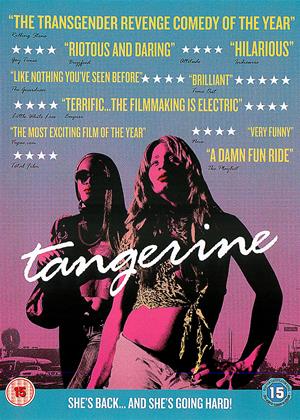 Funny, sassy and brilliantly filmed on i-phones, Tangerine displays many of the features that come to fruition in The Florida Project.

The quality of light and colour is particularly outstanding, and the trans 'demi-monde' of Los Angeles is made very real. There are loud echoes of Alan Clark in the pacy way that the narrative is regularly driven by brisk walking and talking.

Some of the dialogue is so rapid fire that I sometimes felt the need for subtitles, mainly because the writing is so witty. Great soundtrack too!

Sean Baker is a talent to be watched.

Every year there is at least one movie that is praised for featuring a film-making gimmick. In 2014, it was Boyhood for being shot over the course of 12 years. For 2015, it will most likely be Tangerine for being shot entirely on iPhones (with some digital enhancements in post). The film is not staged as a documentary or as one of those oh-so-popular found footage pieces. It doesn’t look cheap either the way the picture feels mobile and energetic as it whips around the trick-turning streets of Hollywood. Though mostly sold on the gimmick, it’s a gimmick that’s perfectly suited to its tale of prostitutes and pimps. And if it isn’t the simple tech that draws heads, the casting of transgender actors will certainly spin a few.

It’s Christmas Eve and transgender hooker Sin-Dee is celebrating her served sentence of a month in prison with her trans pal Alexandra. She can’t wait to see her pimp/boyfriend Chester, but her hot head explodes easily when Alexandra slips information that Chester is cheating on her. Despite Alexandra’s pleas to not cause drama, Sin-Dee sets off on a day-long quest to find this woman and question her in front of Chester. What follows is an adventure that takes them from the humble confines of a donut shop to the seedy motels of whores, crossing paths with several odd individuals of the urban landscape.

There’s an odd and compelling vibe to Tangerine’s tale. When Sin-Dee questions suspects leading to her white whale, she is loud, uppity and fearsome in her approach. When Sin-Dee is walking the streets or getting into fights, the soundtrack booms with modern pop as the camera follows her actions closely. There are handful of shots that hold long enough to carry the eyes with a wicked sense of realism. Alexandra services a male client during a car wash which occurs in real-time as we watch the car wash start and finish while the occupants do the same. Sin-Dee bursts out of the donut shop and goes around the corner as we closely follow over her shoulder. Shooting on iPhones gives the picture a sense of mobility and freedom not present in most pictures that want to keep the camera constantly on and moving.

The performances are just as natural as the camera work. Sin-Dee and Alexandra are played by transgender actors Kitana Kiki Rodriguez and Mya Taylor respectively. In casting the accurate sexual orientations for the roles, none of their actions feel artificial. When Sin-Dee insults everyone around her on her path, she does so with the slick tongue of a woman on the street. When Alexandra rolls her eyes in frustration at trying to level Sin-Dee’s rage, there’s a genuine expression to her face and actions. All the elements that bond this script together - from rooms of orgies and drugs to back alleys of drugs and accusations - add to the street flavor of such a picture so well that it could very well be a documentary. The dialogue feels especially natural the way the final confrontation features so many characters bickering and yelling over each other.

Most importantly, writer/director Sean Baker manages to find the perfect mixture of drama and comedy. There rarely feels as if there is a scene dedicated to just drama or comedy. It comes and goes as it pleases, catching the audience off-guard in moments that can range from broken hearts to comical squabbles. Though its core story feels very old fashioned as a comedy, it’s a movie that offers far more than one would expect. Tangerine has a keen eye, ear and mouth for an unconventional film of transgender prostitutes in the fabric of classic narratives. It has all the makings of a great movie that can still entertain long past the point where the revolutionary decisions in casting and camera work have worn off.