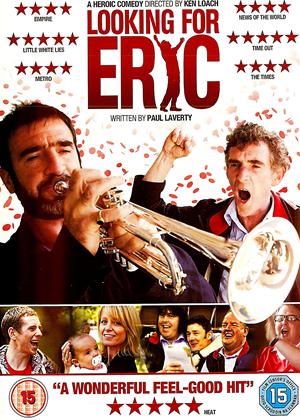 Reviews (5) of Looking for Eric

A Great Surprise - Looking for Eric review by CP Customer

Loach has crafted a heart warming tale of a depressed bachelor trying to make sense of his life and the mess that it has become. It is a tale about friendship and while his postal co-workers share his love of Cantona, you're doing a major injustice to write off this film as a trivial football piece. This is a film that will unite film and football lovers in their appreciation.

After hearing many good things about this film, I was looking forward to watching it.

After 30 minutes of a slow story, following a postman around swearing his head off it failed to grab my attention.

I held out for another 30 minutes willing it to get better but it lacked anything to grip onto.

Very let down, wouldnt bother with this film.

I've wanted to watch this film for a while. What I got was very much what I expected: gritty, coarse in places, elements of real laugh out loud comedy.

The first 30 minutes sees fragile and nervy Postie Steve Evets in a downward spiral. Problems with work, with family. You can see him unravelling before your eyes. With the arrival of Cantona, you see hope, but as fast as the little postie gets up, something knocks him down again. I can see how this would put some viewers off as it is dark stuff in places.

There is swearing a plenty, but don't let it put you off what is essentially an allegory on the value of teamwork and draws a comparison with Cantona's career on and off the pitch; how an individual, however weak or flawed, can succeed when he has a trusted team around him.

Ultimately feel-good but I think I could have done with subtitles in places for Cantona's scenes!

Boring and too much profanity - Looking for Eric review by Harry

Like KH we had heard this was an interesting study in human nature. We were put off by the bad language from the start, and didn't see much reason for persisting in hope of improvement. Even for 15 year olds I would not have given it that rating.

Made me realise how proud I am to be British.

Have watched so many awful Films lately, an d this turned out to be a little gem,full of interesting believable characters.