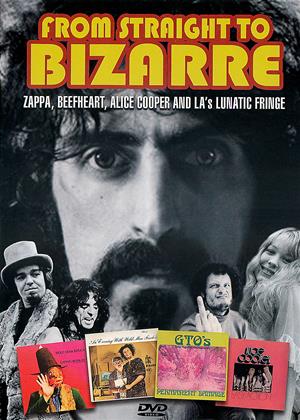 Synopsis:
The impulse for artists and musicians to form their own record labels are many. But often these endeavours are little more than vanity projects for which enthusiasm wanes when the first rush of releases fail to take off - leaving charity stores and flea markets awash with the unsold booty of such initially ambitious enterprises. But on occasion, proceedings in a sideline of this nature can prove not just sustainable but fascinating, profitable and wholly worthwhile; a task made a little easier when the boss is a bit smarter than the average guitar hero! So it was with Frank Zappa.
Desperate to remove himself from his original deal with Verve Records, in 1968 he set up the Bizarre and Straight labels in league with manger Herb Cohen, and so began a string of releases which remain extraordinary in the extreme. Records by Frank himself and with his Mothers of Invention would rub shoulders in the label's racks with releases by notorious paranoid schizophrenic and part time songwriter, Wild Man Fischer, ex-groupies the all female GTOs, acapella gospel collective The Persuasions, the first clutch of Alice Cooper records, Tim Buckley's enigmatic Starsailor, live recordings by Lenny Bruce and Lord Buckley, and a range of other musical oddities, generally of a quite startling quality despite their oft-eccentric content. But it would be a 1969 release by the Mother Superior's old teenage buddy Don Van Vliet - by then long re-christened Captain Beefheart - that would provide the art-statement for which the Bizarre/Straight enterprise is remembered best, and which remains to this day the pinnacle of achievement, not just at the House of Zappa and Cohen, but, for many, also within the normal confines of the genre loosely termed 'Rock and Roll'. To suggest that Trout Mask Replica - for it is this sonic marvel of which we speak - moved-the-goalposts is akin to claiming Jack the Ripper had 'an eye for the ladies'! This film revisits and reviews the astonishing music that came out on Bizarre and Straight, and reveals the background, operations and, crucially, the lives of the musicians, performers and management who made these labels the legendary reality they became. The film contains exclusive interviews with many of the labels' contributors including, Pamela Des Barres, John French, Jerry Lawson, Jeff Simmons, Dennis Dunaway, Neal Smith, Essra Mohawk, Miss Mercy, Kim Fowley, Bill Harkleroad plus authors Ben Watson, Barry Miles, Mark Paytress, Billy James and Ritchie Unterberger. Also includes rare footage, archive interviews, location shoots, extras - and of course the music that made it all worthwhile.
Actors:
Frank Zappa, Pamela Des Barres, John French, Jerry Lawson, Jeff Simmons, Dennis Dunaway, Neal Smith, Essra Mohawk, Miss Mercy, Kim Fowley, Bill Harkleroad, Ben Watson, Barry Miles, Mark Paytress, Billy James, Ritchie Unterberge
Studio:
Sexy Intellectual
Genres:
Documentary, Music & Musicals, Special Interest

Sign up
The Moody Blues: Days of Future Passed: Live

Sign up
Journey of the Childmen: The Mighty Boosh on Tour

Sign up
The Circus of Horrors: The Night of the Zombie

Reviews of From Straight to Bizarre