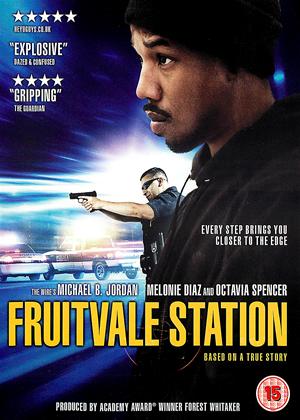 Synopsis:
The multiple Independent Spirit Award and Sundance Film Festival winning film follows the true story of Oscar Grant (Michael B. Jordan), a 22-year-old Oakland, CA resident who wakes up on the morning of December 31, 2008 and feels something in the air. Not sure what it is, he takes it as a sign to get a head start on his resolutions: being a better son to his mother (Octavia Spencer), whose birthday falls on New Year's Eve, being a better partner to his girlfriend Sophina (Melonie Diaz), who he hasn't been completely honest with, and being a better father to Tatiana (Ariana Neal), their beautiful four year-old daughter.
Crossing paths with friends, family, and strangers, Oscar starts out well, but as the day goes on he realises that change is not going to come easily and that he'll have to work hard to make it. As he and Sophina celebrate the New Year and a fresh start, one truly shocking, tragedy shakes his community - and the entire United States - to its very core.
Actors:
Michael B. Jordan, Melonie Diaz, Octavia Spencer, Kevin Durand, Chad Michael Murray, Ahna O'Reilly, Ariana Neal, Keenan Coogler, Trestin George, Joey Oglesby, Michael James, Marjorie Crump-Shears, Destiny Ekwueme, Bianca Rodriguez III, Julian Keyes, Kenny Grimm, Thomas Wright, Jemal McNeil, Steven C Johnson, Alejandra Nolasco
Directors:
Ryan Coogler
Producers:
Nina Yang Bongiovi, Forest Whitaker
Writers:
Ryan Coogler
Others:
Ryan Coogler
Studio:
Altitude
Genres:
Drama
Awards:

Considering the story surrounding Fruitvale Station is well known in the press and a shocking moment in American culture I was surprised by the release of the film but when it comes to handling such a sensitive topic this is an excellent piece of feature film work and it has one of the best central performances by Michael B Jordan that elevates the tense and ultimately tragic story to new heights.

The film follows Oscar Grant (Jordan) as he sets out to celebrate New Years Eve 2008 with friends and family in San Francisco. The night follows his interactions with everyone he meets as he enjoys the party that is new years and while things start out well he finds himself facing undue hardship when he bumps into enemies, some of which he didn’t even know he had.

If you are unfamiliar with the story then I will not ruin it as I believe it will add a certain shock factor that may make the film that much better as part of the horror and amazement of the film is delivered in the final moments. What I will say is that this film isn’t just about Oscar, its about human nature in general and how over the course of one night Oscar sees the best and the worst of people and everything in between and director (and writer) Ryan Coogler captures it perfectly while never showing that he is a first time feature director.

Jordan delivers one of the best performances of the year as Oscar and its a shame that come award season he was not showered with praise but regardless the movie is worth watching solely for some expert character work by the young actor who rose through the ranks of Friday Night Lights to really burst onto the scene in recent years. While more could be said about the excellence of the film, it is really a study in great characters and wonderful actors with a performance by oscar winner Octavia Spencer also shining bright. In the end this is brilliant filmmaking from a fresh new voice people need to be aware of.