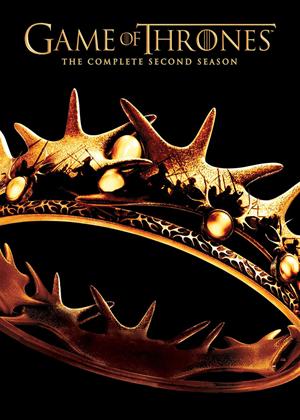 Reviews (2) of Game of Thrones: Series 2

Season 2 continues in the same vein as Season 1 - shedloads of blood (or should that be loads of bloodshed?), assorted stabbings, swordplay, f-ing and blinding, nudity and bogus sex scenes. Yes, 'Game of Thrones' continues - and if you like mediaeval epic fantasy, then this is for you. It's very, very well done - of its type.

10 episodes, just under an hour each - plenty of time to develop a complex tale with many (very many) characters. And if there is a criticism, that's it - so many characters to remember.

This time round, the dwarf Tyrion Lannister (well played by Peter Dinklage) takes a leading role as he moves from the butt of jokes to an effective leader. The cruel, capricious, vicious child-king Joffrey Lannister sits on the iron throne, manipulated by his mother, the Queen Regent. With the deaths in Season 1 of King Robert Baratheon (Mark Addy) and his right-hand man Eddard Stark (Sean Bean) the houses of Baratheon and Stark rise against Joffrey. Battles rage across the realm and culminate in Episode 9 in a mighty seaborne invasion, where Tyrion's strategy wins the day but is overshadowed by the arrival of an army led by his father, Tywin Lannister (Charles Dance) - who has a poor opinion of most of his own family. Alongside these events, the Mother of Dragons has assorted adventures as does Jon Snow serving in the Night's Watch. The season ends with the revelation of the White Walkers beyond The Wall...

Confused? You will be, but sit back and immerse yourself in this fully realised fantasy world and it becomes an alternate reality. It's great stuff - just remember there's a real world out there and step away from the screen for a while.

On the other hand, you might become addicted to what is essentially a mediaeval soap opera, with the dodgy characters and dodgy dialogue that all soap operas suffer from :)

This fantasy middle age, middle earth drama is very poorly acted in parts. The plot is intensely thick with hundreds of characters. Seeing Series 1 beforehand may be an advantage. Reading the book similarly. It is very difficult to follow even with the scene by scene interactive help. The saving grace is the detail of the scenery and costume, this is what blu-ray is for. It is most definitely a cult viewing for Lord of the Ring fanatics.

Unless you’ve been living under a rock for the last three years you are bound to have heard of the Song of Ice and Fire television adaptation, for those who haven’t however you really don’t know what you’re missing!

Based on the epic fantasy book series by George R.R Martin Game of Thrones second season is the on screen adaptation of the second novel in the series, Clash of Kings. The series returns to the North, King’s Landing, Dragon Stone and the Wall and continues to follow the Starks, the Lannisters, King Stannis and Daenerys Targaryen.

As a fan of the novels I was somewhat apprehensive about watching Game of Thrones when it first began airing in 2011, having watched all of the show so far however now my only concern is when Martin intends to release the next book as the show has only whetted my appetite even more.

For those who like their fantasy serious and epic then Game of Thrones is perfect for you, with a healthy dose of violence production studio HBO have done their utmost to keep the show as close to the books as possible; and with the wonderfully sharp tongued dwarf, Tyrion Lannister, there’s also a smattering of comedy just to take the edge off.

The cast is fantastic; Peter Drinklage as Tyrion utterly steals the show however, playing the character to a T whilst also leaving his own indelible mark. The rest of the cast, the gorgeous and rugged Stark boys Robb and Jon, the imperious Sarah Conner – I mean Cersei Lannister and the stunning Emilia Clark as the strong but astute Princess Daenerys, are also fabulous choices. The show, though it’s costumes, special effects and sets are appropriately busty, awe inspiring and impressive, would be nothing without its cast and it them entirely that make the show such a success.

The series balances darkness and heroism with mystery and (a lot of) sex, culminating in a must watch show that is infamous for its edge of seat story and cliff hanger endings. For those who enjoy such films as Lord of the Rings and are looking for something to tide them over until the second part of the Hobbit trilogy is released this Christmas, Game of Thrones comes highly recommended.