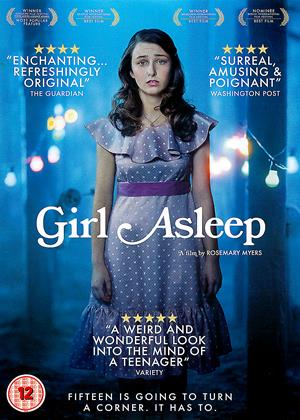 This Australian coming-of-age drama is charmingly quirky, with its oddball characters matched by some nice directorial flourishes, such as sudden outbreaks of synchronised dancing, or titles ('Later that day' etc) embedded into cereal packets and posters within the film's world. Ironically, probably the weakest aspect is the extended dream sequence towards the end which gives the film its title - it's full of interesting Lynchian imagery(feeling very 'Twin Peaks' at times), but it feels slightly heavy-handed in its treatment of what are ultimately fairly standard adolescent fears. Despite this, the lead characters and their waking interactions are ultimately more than enough to get invested in, and for anyone looking for some offbeat human drama this is recommended.

Girl Asleep is a modern (or rather for the elitists: a contemporary) take on a century’s old coming-of-age tale that involves a protagonist whose will to grow up is impaired by their will to stay forever young. Avoiding responsibilities, basically. Only this time, the protagonist is a girl named Greta (played by Bethany Whitmore), who navigates through the tribulations of modern (contemporary) life like a leaf on a wind: fragile and without any clear direction or a sense of purpose. This sense of purpose is the driving force behind the main conflicts in Girl Asleep, where drama and comedy meet halfway through to bring you laughs and cries, and other emotions which I won’t dare to disclose. Or so the film’s director has thought. To find if I liked this particular piece of cinema, feel free to indulge below (no clickbait, promise).

The film is directed by Rosemary Myers, starring Bethany Whitmore as the quintessential child Greta, Harrison Feldman playing down-to-earth Elliott, and a bunch of other characters that serve their purposes as sideliners I guess. Never mind that, but focus on Greta, as she’s the real star of the show. Greta is a 14 year old girl who doesn’t want to grow up plain and simple. However, she’s also charming and breaming with enthusiasm and intelligence; therein, her upcoming birthday is looked upon as an initiation tale (rite of passage) through which she must navigate if she wants to beat the antagonist – which again, is the unwillingness to become responsible (talk about a film message). Then and only then, Greta will see the true world for what it is: gritty, grey, and very much real as real can be. Which brings us to the next point.

The film carefully and deliberately teeters between two worlds: those of the metaphysical, innocent, and loyal, as presented by late 70s furnishings, haircuts and fashion; on the other side of the spectrum lies the real world, which I wouldn’t dare to spoil since the whole ordeal revolves around that reveal.

In regards to its technical aspect, Girl Asleep does its job, and does it well I might add. The sound design and visuals are also on par as well, providing a sense of movement, direction, and progression sin an invented world that feels very much real full stop. Some may find the quirkiness of the film too much distracting for its own sake, but that’s OK as long as you’re not bashing the film for not fulfilling your previously-formed expectations, expectations which by the way can never become fully realized regardless of whichever medium you’re trying to satiate your artistic thirst. Or in other words: lower your expectations, avoid trailers, sit back and enjoy the ride.

All in all, Girl Asleep is a worthy timewaster if you don’t have anything going on in your life right now with elevated priority. Good for a laugh or two, and awesome for a cozy family viewing for those with kids.