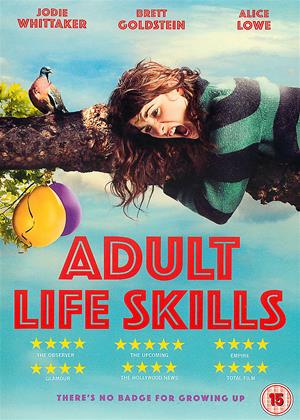 Adult Life Skills is a heartfelt film depicting a very peculiar coming of age of a certain girl named Anna who, amidst a personal tragedy, refuses to move on both mentally and space-wise. And it’s not even her fault (well, partially at least) insofar every circumstance that surrounds her ultimately prevents her from doing her bidding, i.e. continue with her plans. To this extent, Adult Life Skills can be understood as a coming-of-age (albeit, late) tale that’s flawless in its execution as far as the visual art goes. In regards to its script, well, let’s say Rachel Tunnard’s feature has its fair share of flaws.

As said, Jodie Whittaker plays Anna, with a captivating vigor that puts other so-called “actors” to shame. In fact, Jodie Whittaker (as her character) will make you laugh, cry, frown, grip your sit’s paddings with both hands, and scream inside to no avail. Scream because deep down, you really want for her to succeed in her trials and conquer the seemingly unsurmountable obstacles that are thrown at her. Yes, this is Anna, and she’s going to yield an emotional reaction from the audience one way or another.

The other actors each populate fairly underdeveloped but likable roles: there’s her dis-romantic suitor Brendan (played by Brett Goldstein), Lorraine Ashbourne as her determined mother Marion, and the other two women Eileen Davis and Rachael Deering as the idiosyncratic characters who change sides and attitudes as quickly as a newly born sea turtle rushes for the sea. Add to this formula the always exquisite Alice Lowe, plus the impressive Ozzy Myers portraying a mischievous boy whose antics fool no one, and you’ve got yourself a pretty watchable movie overall (well, quite watchable actually).

What this movie doesn’t have: explosions, car chases, or seamless violence. Instead, Adult Life Skills offers a warming and unique take on a quiet, suburban family and its lead Anna with all of her inner conflicts and misdoings. In fact, Anna is torn between holding on and letting go, and has a hard time doing both.

Additionally, Adult Life Skills is full with humor and its presentation is neither overly dramatic, nor terribly quirky. Rachel Tunnard’s piece falls somewhere in-between, showcasing a 30-year-old girl’s peculiar ability to cope with a sudden loss by using unconventional means. These means include making videos with thumbs that narrate whether or not Yogi Bear is a nihilist or not.

Bottom line, Adult Life Skills is very rich story-wise and full with narrative magic, although its script doesn’t connect all the dots in regards to character development and narrative cohesion as well. All things considered though, this film is a perfect representation of loss, grief, and acceptance in the life of an emotionally rich and creative person. See it.