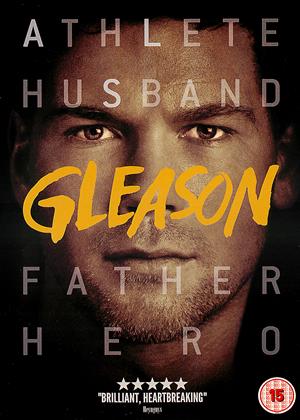 A heart wrenching documentary about passion, love and the pursuit of happiness in the most dire of circumstances – Gleason tells, and continues to tell the story of Steve Gleason and his battle with Amyotrophic lateral sclerosis, better known as ALS. But most of all, Gleason is a story about celebrating life and getting the most out of it, even when one thinks chances are not in one’s favor.

By all means, a must see.

Steve Gleason has become, undoubtedly, a hero while blocking a punt for his then team New Orleans Saints, immediately after Hurricane Katrina took its toll all around the States. For this historic moment, the team had put a life-sized statue outside of the arena, where it continues to greet fans and people who are eager to enter the stadium. Since then, Gleason has suffered greatly, but has also stayed optimistic about the future whilst continuously lending a helping hand toward others who need help the most.

The story is straightforward and is told in a simplistic manner – a choice by director Clay Tweel that is best suited for depicting such devastating events about one man’s struggles in life. Against all odds, Steve Gleason has managed to pull off a staggering 9 year career among NFL peers and bosses; then, he went on to marry the love of his life Michel Varisco-Gleason, who in turn had become Gleason’s prime caregiver and a mother of their son born in 2011.

Furthermore, the director doesn’t hesitate to show us how ALS takes its toll in Gleason, and how in turn his beloved wife Michel suffers also. Steve Gleason saw its retirement from active playing take place back in 2008. He was diagnosed with Amyotrophic lateral sclerosis in 2011. Right after, he and his wife went on a 2 month adventure in the Alaskan wilderness, to clear their thoughts and make plans for the inevitable future.

Since then, the full-of-life Gleason has taken the initiative to film himself in Vlog format, so he could later show the footage to his son.

After the couple welcomes their son Rivers, the cunning disease has progressed and one sees how Steve starts losing his capacities to speak little by little, as well as his psychomotor abilities to freely move his body. It’s both devastating and eye-opening to witness such events, let alone be on the receiving ends of ALS. Thankfully, his wife, family and friends build a moral and psychical support so ease Gleason’s suffering and comfort him when he needs comfort the most.

Gleason is a hard film to watch, because it depicts raw reality at its cruelest and life at its merciless. Still, apart all that, Steve Gleason has managed to keep a kindred spirit and positive attitude from which all concerned individuals can learn from.

A powerful, life-changing experience that will stay with you for years to come.