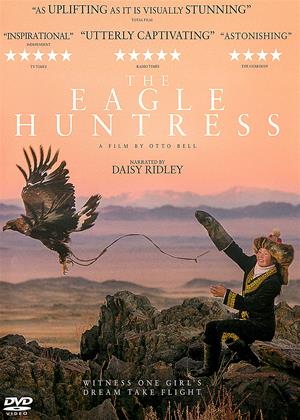 Reviews (2) of The Eagle Huntress

I enjoyed this film very much ,the girl & her family were so passionate about there way of life, and although hunting with Eagles was a male prerogative ,her father backed her dreams all the way ,stunning scenery ,happy and genuine people made this documentary a joy to watch ,& of course not forgetting the Eagles themselves.

Breathtaking scenery and an amazing story. Fascinating insight into their lives. I found myself thinking with all the comforts and technology we have, was their life richer? Commentary was ok, and is admit that as Daisy Ridley was doing it, that did draw me into renting this and I'm glad it did.

Sony Classic Pictures has done it again: The Eagle Huntress is their ultimate documentary piece about a Mongolian girl and her eagle who embarks on a quest to become the first female eagle hunter in the history of her tribe. It’s an uplifting, feel-good film where there are no good guys and bad guys, but the good guys win nevertheless. Add to that a meticulous narration done by Star Wars darling Daisy Ridley, and you have yourselves a winner folks.

The Eagle Huntress is directed by Otto Bell and follows Aisholpan Nurgaiv - the ultimate badass Mongolian girl who continues her family’s tradition by competing to become an eagle hunter herself. This would all be fine and dandy, if not for the fact that until her market ‘penetration’ among her peers – only boys were allowed to wield the power of the eagles insofar the craft was present in the family tree. So, Aisholpan not only has to break century-old conventions, but also prove herself worthy of mentioned craft.

And what a craft it is.

The whole premise works so well as if lifted directly from a Disney animated sequence and translated into full-fledged, real action film. Some men in the tribe oppose Aisholpan, and so she have to overcome not only technicalities, but also adversity from her own people. Thankfully, her dad has her covered and is supportive all the way until she yields the power of eagles for hunting, as said in the film: fur and food.

The photography is flat-out gorgeous and mesmerizing all at the same time. Especially the scenes where we’re treated a delicious slow-motion sequence of an eagle hunting for his prey. Outstanding and excellent: a scene I could watch all day and not blink even once.

Talking about a master of his craft.

Furthermore, as events unravel in Ulgii in the west parts of the Mongolian mountains, it becomes perfectly clear The Eagle Huntress is not all eye-candy (despite its dedication to breathtaking aerial scenes of eagle hunts), but is also a heart-warming tale about love, friendship and the power of family ties. And it’s always-so nice to see how Aisholpan’s father Nurgaiv gives all the moral support and physical training that her daughter needs to undergo in order to earn the titular, well, title.

The Eagle Huntress works at all levels: whether as a thrilling ride to the farthest-most reach of the Mongolian wilderness, as a human tale of endurance and perseverance against all odds, or just a plain simple feel-good tale which encircles a whole another era for Aisholpan and her father’s community.

A simple must see, and I’m really meaning it this time.