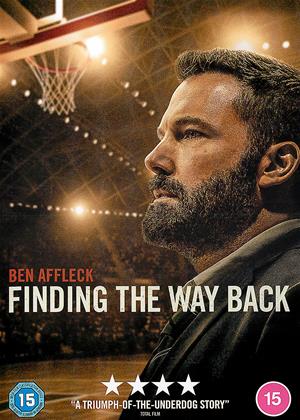 Synopsis:
Jack Cunningham (Ben Affleck) was a high school basketball phenom with a promising future when he suddenly walked away from the game. Now, years later, he is drowning in the alcoholism that cost him his marriage and any hope for a better life. When Jack is asked to coach the basketball team at his alma mater, he may have finally found a reason to confront his demons, but will it be enough to heal the deep wounds of his past and set him on the road to redemption?
Actors:
Ben Affleck, Al Madrigal, Janina Gavankar, Michaela Watkins, Brandon Wilson, Will Ropp, Fernando Luis Vega, Charles Lott Jr., Melvin Gregg, Ben Irving, Jeremy Radin, John Aylward, Da'Vinchi, Matthew Glave, Nico David, Todd Stashwick, Chris Bruno, Emelia Golfieri, Layla Golfieri, Nancy Linehan Charles
Directors:
Gavin O'Connor
Producers:
Gordon Gray, Ravi D. Mehta, Gavin O'Connor, Jennifer Todd
Writers:
Brad Ingelsby
Aka:
Torrance / The Has-Been / The Way Back
Studio:
Warner
Genres:
Drama, New Releases, Sports & Sport Films

Reviews of Finding the Way Back

The Way Back couldn’t be a more fitting title for a film such as this with such a performance. Ben Affleck had been hurting not just from his lukewarm acting roles but his personal life. A story of former high school basketball athlete getting his groove back by coaching a ragtag group of misfit athletes doesn’t sound like the most inspiring story. But here is a film that is presented with an opportunity to pull itself out of the mundane and miraculously finds something more than the familiar.

Affleck plays Jack Cunningham, a man who now leads a quiet life in a seaside town. Working in construction, he mostly keeps to himself. He works his shift without much issue and then steers his truck over to the bar, taking a drink without much talk. If he doesn’t end up drunkenly stumbling home, he still returns to his empty house to indulge in his fridge of beer. In the morning, he drinks in the shower. After work, he’ll drink in the car before even getting to the bar. Slowly, his silent past is revealed. We soon learn that he was once a high school basketball legend and that he was divorced. And that a tragic event forced him to retreat into his semi-hermit lifestyle, only sometimes venturing out to visit family.

Jack’s Christian high school reaches out to him to let him know that their basketball team is in desperate need of some guidance. They haven’t won a championship since...well, Jack. Astounded at the challenge, the reluctant Jack takes a look at the boys he’s dealing with it and it’s the familiar ensemble of underdogs. The cut-up, the loverboy, the cocky jock and the quiet one with problems at home. Perhaps Jack has seen this kind of movie before and is aware enough on how to handle them that he doesn’t take extra care in handling them. Even his speeches to motivate them come off believably harsh and true, never slipping into melodramatic inspiration or hokey heroics.

Because the truth is Jack’s problems with his past as well as his alcoholism is not something that will merely be cured from coaching a team to victory. That’s a limited mindset that the film, fortunately, doesn’t favor. It instead shifts the focus more towards Jack’s problems that are handled with a certain gentleness and grace. Jack’s drinking problem is never overly exaggerated, treated more as a lacking emotion band-aid than a dangerous path of physical damage. He needs help desperately and that help will not be resolved with basketball. In order to receive help first, he must come to terms with himself and the great tragedy that has shifted his life in an uncomfortable direction.

It’d be easy enough to see where a film like The Way Back would shift away from its greater drama for easy theatrics and it’s intriguing to watch the movie actively try to avoid these traps. For example, the basketball games are seen in a manner of the most important dramatic highlights rather than always showcasing that game-winning shot. Often, the games will quickly cut to the final score, giving us the basic facts rather than linger on too much basketball footage. The players have various problems that need resolve but Jack’s devotion never seems to nosey in this respect. Sometimes the avoidance of melodrama backfires, as with the secondary character of Doc, a bar patron that helps Jack home every night. Doc seems to have a connection to Jack’s father and perhaps there was something in Jack’s father’s past that shaped his future. Or maybe he’s just a red herring.

I was very much surprised by how compelling The Way Back ended up being and never fell into the pit of forgettable sports drama. We don’t need a scene of Affleck giving a rousing speech while the music swells. Seen it before. What I haven’t seen as much out of Affleck is a somber realization of his life being in dire need of contemplation and facing fears, delivered in a manner so well it harkens back to his performance in Gone Girl. Those expecting an inspiring sports drama will be let down by the film’s slow pan away from basketball. Those expecting more will be greatly satisfied with fantastic direction on top of what could’ve been a mildly forgettable film.