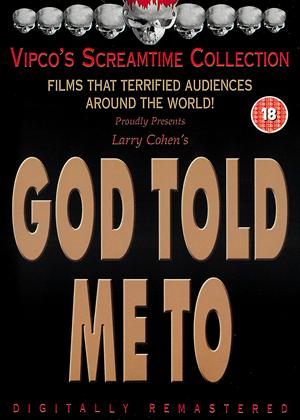 Sign up
"X": The Man with the X-Ray Eyes

This is one of those films you're far more likely to have heard about than actually seen, and, like almost all such films, it doesn't really live up to the hype. The main theme of the first act - respectable citizens are inexplicably committing mass murder for no reason except that allegedly God told them to is, like many of the concepts around which Larry Cohen bases his movies, sufficiently off-the-wall to be intriguing. Unfortunately, what happens in the second act throws far too many big ideas our way without having either the time or the budget to adequately explore them.

It's not easy to discuss the latter part of the film without giving away things which are meant to be huge surprises. However, it shouldn't surprise anyone to learn that the mysterious killer-by-proxy our hero, an NYPD detective, is trying to catch does not, fortunately for him, turn out to literally be God Almighty. The truth about who and what this character is may have seemed a little bit controversial in a country as religious as the USA 40 years ago, but the film only touches in the most tangential way upon such questions as whether the existence of a fake God makes the real one less likely to exist, and the unanswered questions about the validity of religion feel less like subtle ambiguity than dodging an issue so controversial that it might affect the film's distribution (they did in fact have to change the title to "Demon" in some states).

There's also a strange void at the heart of the movie. A major character's backstory, which we need to know in order to understand his seemingly pointless actions, is left almost completely mysterious, though we could and should have seen it in flashback. From the very little we do get to know, it looks suspiciously as though there was meant to be a subplot shamelessly ripped off from Stephen King's recent bestseller "Carrie", but it was dropped at the last moment because Brian De Palma's "Carrie" was in production at the same time as this film. It's certainly true that the most shocking (and blasphemous) image in the movie owes a lot to David Cronenberg's "Rabid". But to be fair, I was reminded so often of "Scanners", which came out 5 years later, that it looks as though maybe Cronenberg pinched more from Cohen than Cohen stole from him in the first place.

That being said, you can't fault Larry Cohen for lack of ambition. This is particularly apparent in the St. Patrick's Day Parade scenes, where Cohen, never a man to be discouraged by having to work within a tiny budget, used several thousand real policemen as unpaid extras without telling them, or indeed bothering to obtain a filming permit because they're really expensive. And if there are as many poorly-explored grandiose concepts crammed into this little independent film that barely qualifies as a B-movie as Sir Ridley Scott managed to stuff "Prometheus" with, Larry Cohen has a far better excuse for a somewhat incoherent end result than Sir Ridley! I'd love to have seen what Larry could have done with that kind of budget. It would probably have been a mess, but a gloriously entertaining mess. Though not the kind that gets you a knighthood.

So overall, worth watching as a very bold experiment that didn't quite work, with characters, even the minor ones, who come across as flawed, complex, believable people, thus making the unbelievable situation more credible (a Larry Cohen trademark that very few Hollywood screenwriters have borrowed, though most of them should). Watch out for Andy Kaufman's screen debut as the cop who goes nuts during the big parade. Also, there's an unintentionally hilarious easter egg for anyone who remembers "Space 1999".