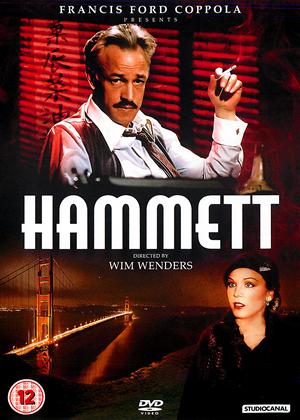 Dashiell Hammett, the man who invented the hard-boiled detective story as we know it, certainly knew what he was writing about. Unlike Raymond Chandler or nearly all his other less famous rivals, Hammett had genuinely worked for the Pinkerton Detective Agency, and apparently he had to do things that led to his resignation and never rested easily on his conscience. So a fictional tale in which this real author puts down his pen, picks up a gun, and tries to act like one of his own characters would actually be very plausible.

The trouble is, this isn't it. Wim Wenders, a director most famous for a movie about a glum angel in a trench-coat falling in love with a trapeze artist, isn't noted for his gritty realism. And Francis Ford Coppola, whose degree of participation isn't made clear by the two extremely non-specific production credits he gets, but whose visual style is all over this film, sometimes gets carried away to the point where the sets out-act the cast, as happens in "Dracula" and "Hugo". The result is that this slightly peculiar movie looks fabulous, but you get the feeling so much effort went into recreating the bustle and squalor of pre-war downtown San Francisco that character and plot development were sometimes neglected.

It's one of those films where you keep going: "Hey, it's Elisha Cook Jr. who played Wilmer in 'The Maltese Falcon' with Humphrey Bogart way back in 1941 playing some other bloke!" rather than being gripped by the complicated and confusing story, in which everyone who matters appears and disappears more or less at random, and everybody's double-crossing everybody else. This is of course exactly what happens in Hammett's most famous novel "The Maltese Falcon", and naturally this film's epilogue shows our hero starting work on that novel, which by now we know was inspired by the adventure we've just seen, except that he's going to rewrite everything the way he thinks it should have been, not the way it really was. There are two problems with this. Firstly, the obvious one that if you're familiar with "The Maltese Falcon" (and if you're watching this movie you probably are), you keep being distracted because you've spotted a detail which is going to end up in the novel. And secondly, "The Maltese Falcon" is so well-written that if the plot's a bit of a muddle it doesn't matter. Frankly, you couldn't say the same about this movie.

I like this genre and I wanted to like this film, but it doesn't quite come off. It reminded me a lot of Roman Polanski's "Chinatown", with the crucial difference that in that movie, as in "The Maltese Falcon", the larger-than-life characters dominate the story. Whereas here, so much attention is being paid to both the way everything looks and the necessity of including sly references to novels and movies other than the one we're watching now that we notice how flat the characters are, and how little the hero is actually accomplishing as the contrived plot leads him around by the nose. It's not terrible, but I'd definitely call it a well-intentioned misfire.