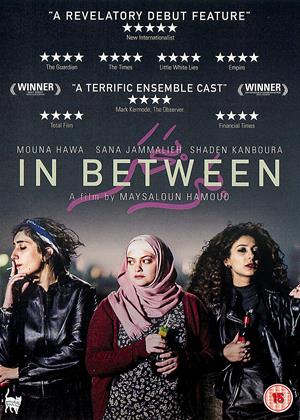 Synopsis:
When devout university student Nour (Shaden Kanboura) moves in with successful lawyer Laila (Mouna Hawa) and club DJ Salma (Sana Jammelieh), she is shocked by their lifestyle. As Laila fights to retain her freedom in the face of a new relationship, Salma falls for beautiful trainee doctor Dounia (Ashlam Canaan), a romance she must hide from her family. Nour is set for an arranged marriage to Wissam, an exemplary member of the community who may not be as respectable as he appears. 'In Between' follows the lives of these strong, independent minded Palestinian-lsraeli women in Tel Aviv.
Away from the constraints of their families and enforced tradition, they find themselves 'in between' the free and unfettered lives they aspire to lead and the restrictions imposed on them by a blinkered society. First-time director Maysaloun Hamoud's exhilarating depiction of the lives of 'liberated' Palestinian women in Israel earned her the first Palestinian fatwa in 70 years.
Actors:
Mouna Hawa, Sana Jammelieh, Shaden Kanboura, Mahmud Shalaby, Nisrin Abou-Hanna, Miri Abu, Henry Andrawes, Ali Assadi, Elias Assadi, Ashlam Canaan, Afaf Danien, Aiman Daw, Suhel Haddad, Khawlah Hag-Debsy, Nahed Hamed, Sobhi Hosari, Rojeh Khleif, Amir Khoury, Yasmin Makhloof, Tamer Nafar
Directors:
Maysaloun Hamoud
Producers:
Shlomi Elkabetz
Writers:
Maysaloun Hamoud
Aka:
Bar Bahar
Studio:
Pecadillo Pictures
Genres:
Drama
Countries:
Israel

Reviews (9) of In Between

A familiar theme hammered home - In Between review by JR

Good performances, but the theme of the film is familiar - the clash between the conservative and sexist values of Palestinian men and parents , and the western free lifestyles of their daughters. One of the flatmates is a lesbian, one is very devout, and the third is a lawyer who is also regular drug and alcohol user. The film maker's political and philosophical points are hammered home in an unsubtle way which detracts from the viewer's involvement with the characters. I began to think the film had been funded by the tobacco industry because almost every frame in the film featured cigarette smoking.

Strong performances - In Between review by Dax Williams

This film is about the lives of 3 female flatmates in Tel Aviv. Devout Nour, who is engaged to be married, moves in to the spare room of the appartment occupied by Laila and Salma - who follow a less than traditional lifestyle. Like many movies coming out of the Middle East it deals with the clash between generations as well as issues of gender relations, orientation, identity and tradtional values. It is not a heavily plot driven movie, and wont be to everyone's taste, but the central performances of the three women are superb and I found it to be very confidently made and was impressed throughout.

Expected more - particularly the subtitles - In Between review by JS

The problem with film is that it is supposed to transport one beyond the stereotype and engage with the story.

Here, the nuances were often lost in the subtitles.

WHITE ON WHITE SUBTITLES DON'T WORK!! IS ANYONE LISTENING?

The first half floundered without firming up the character relationship.

The second half was much better and the director delivered the expected patriachy, a little bit of the inter-communal tensions but do liberated Palestinian "girls" really behave so outlandishly even in a cosmopolitan city like Tel Aviv?

A ground-breaking film that earned the director a fatwa! - In Between review by PV

OK so this film can be hard work and a bit slow at first BUT it's the first Arab/Palestinian film to show real life like this, and got the director/writer condemned massively and even got her a fatwa from imams! That means it's worth watching.

If this were made in Britain, the assault scene would be used as a stick to beat all men with and the woman who suffered it would be destroyed; here in this society, she moves on. Says it all really.

Islam and preachers come out of this badly, and both women and gay people are shown living their lives in a place where characters say to each other 'Where do you think this is - Europe?'

However, this is not male attitude to women but MUSLIM attitudes - which include often very conservative and devout Muslim women who are the ones who organise forced marriage, oppression of wives and FGM.

Worth remembering that 10% of Israel's population is Arab and they enjoy the SAME rights as anyone else in law - and work in professions there too. It must be liberating for them, as is shown here.

Not great but interesting to watch at least.

Interesting movie - In Between review by BE

A film with substance and good acting. This was an eye opener on culture issues and what it must be like to live in modern day Israel. I failed to initially engage with the characters as I was missing a lot of the quite fast dialogue. The white subtitles were placed on top of the actual film thus making them impossible to read when the presenting scene was light as well. Poor show. Other than that, I am glad I persevered with it.

unsatisfactory - In Between review by MF

the film feels like a carbon copy of light Hollywood films which approximate a 90 minute comercial for clothes, drink and cigarretes. The characters are stilted and with little depth . the director shows the struggles of young Palestinian women to assert themselves in between their traditional families and the permisive Tel Aviv scene. however, that permisivenes refer only to clothes, make up, drink and cigarrets. there is no reference to the discrimination that Palestinian citizens and workers face in Israel. also there is no single shot of armed Israeli soldiers in the streets, who are ubiquitous in Israeli streets. from this perspective, the film becomes a 90 minute comercial for Israeli propaganda of being a democratic society and a rainbow society.

as a saving grace, the relationship between the thre young women is creative and heart warming.

review - In Between review by ak

quite a good story and interesting view on a culture i know little about.

Should have been longer - In Between review by AKL

I quite agree with all that JR said. On top of this, I think the film tried to pack too much into its reasonable length. For once it would have been a better mini-series for TV with time and space to develop its characters and their background.

Riveting taboo-breaker - In Between review by Alphaville

A similar British film would be sullied by social realism and Ken-Loach-type politicking, but In Between frees its characters from any agenda save personal independence. It gives them the space to be themselves and gives us the space to become involved in their plights. Unlike the similarly-themed and coruscating Mustang its message will be blunted for some by making its heroines chain-smoking drug-takers, but you’ll soon be rooting for them in their fight for the right to be whatever they want to be. Like Mustang, it’s a character-driven movie that draws in, holds you in its thrall and leaves an indelible impression