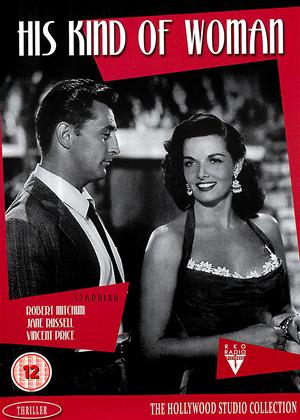 Synopsis:
Deported gangland boss Nick Ferraro has hatched a scheme to re-enter the States and take charge of his crime racket. Dan Milner is a professional gambler who is roughed up by Ferraro's hoods and then offered $50,000 to leave America and head to the remote Mexican resort of Morros Lodge. En route, Milner bumps into the beautiful Lenore Brent, a nightclub singer and mistress of Hollywood star Mark Cardigan. As Milner settles into the rich playground of Morros Lodge, his every move is watched by Thompson, one of Ferraro's henchmen. Realising that he may be in over his head, Milner decides to make his own enquiries as to the identity of his paymaster.
But Nick Ferraro is not the type of man to be investigated...
Actors:
Robert Mitchum, Jane Russell, Vincent Price, Tim Holt, Marjorie Reynolds, Raymond Burr, Leslie Banning, Jim Backus, Philip Van Zandt, John Mylong, Carleton G. Young, Dorothy Abbott, Tol Avery, Howard Batt, Richard Bergren, Danny Borzage, Mary Brewer, Peter Brocco, Barry Brooks, James Burke
Directors:
John Farrow, Richard Fleischer
Producers:
Robert Sparks, Howard Hughes
Voiced By:
Sam Balter
Narrated By:
Charles McGraw
Writers:
Frank Fenton, Jack Leonard
Studio:
Odeon
Genres:
Classics, Drama

Reviews (1) of His Kind of Woman

Howard Hughes, who produced this film, eventually went stark raving mad. Judging by some his production decisions on this and other movies, he was never entirely sane to begin with. There's nothing here to equal his casting of John Wayne as Genghis Khan (and then giving most of the cast and crew cancer by shooting the film on a nuclear test site), but there's a peculiar schizoid quality to the whole thing, as if a completely different movie from the one we're watching is gradually converging on it, until by the end they're hopelessly entangled. Which makes it perhaps the oddest film in the noir genre, and worthy of cult status for its sheer eccentricity.

Robert Mitchum, playing an easygoing, streetwise hard man with a soft center, who gets going when the going gets tough, and may have a veneer of cynicism but always does the right thing, is absolutely in his element, and effortlessly carries most of the film. Jane Russell, with whom Howard Hughes was obsessed for two reasons, both of them on display in nearly every scene she's in thanks to her wardrobe of low-cut dresses, was never going to be the biggest star ever, despite Hughes's efforts, and, were it not for that ever-present cleavage, is so tall, square-jawed, and occasionally deep-voiced that she could almost be an unusually convincing drag queen. As for Vincent Price...

Well, we'll come to him in a moment. To start with, it's all about Mitchum finding himself for no apparent reason in a situation so suspicious he'd have to be asleep not to notice he was almost certainly in serious danger, and trying to get to the bottom of it. And of course bumping into Russell, to whom he's instantly attracted, and who may or may not be part of the sinister scheme. As a mystery, it's badly compromised by the fact that we've seen what the villains' plan is at the very start of the film, so we know he's wasting his time with irrelevant padding in the overlong midsection of the movie. There's even a storm which delays the baddies just to give Mitchum extra time to get involved in irrelevant subplots and flirt with Russell.

And then Vincent Price shows up. Not yet typecast as a horror actor, he plays a slightly past-it Errol Flynn-ish movie star. He's a self-obsessed man-child with the IQ of a geranium, and also the third corner of a very unlikely love-triangle with the two leads. Price plays this simpering idiot extremely well, but he's obviously the annoying comedy relief character who serves no purpose other than to waste celluloid and our time. And then... Well, let's just say that as unexpected character development goes, this is a doozy that you definitely won't see coming!

I notice the film had two directors. This may explain the increasingly obvious mismatch in style between the main plot-threads, which culminates in two completely different and totally incompatible movie genres literally battling for domination of the film they've somehow both ended up in, to a degree we wouldn't see the likes of again until "Cowboys and Aliens". Vincent Price fans who aren't aware of his early work will love this movie, which I'm pretty sure is the first one in which Price was allowed to turn his overacting dial to 11, and he's obviously making the most of it and enjoying every minute. Noir buffs get to see Robert Mitchum being Robert Mitchum very well, and towards the end, taking part in some genuinely gritty and, for the time, extremely violent pulp action. And everyone else gets to see a movie so bizarre you've got to love it.