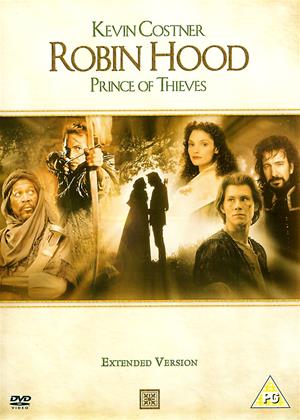 I saw this at the cinema when it first came out over 20 years ago and I liked it, despite the dodgy accents. I must have missed all the times it's been shown on TV and now watching it again for the first time since that cinema viewing I have a somewhat more jaundiced opinion.

Robin Hood is a swashbuckling English legend. Why then tamper with the legend? Why the extra black character? Why cast Americans in lead roles? Why all the American accents - don't they have voice coaches? Why do the British actors seem to speak with a strange mix of Somerset / Cockney dialects? Why does it apparently only take one day on foot to travel from the white cliffs of Dover to Nottingham (apparently via Hadrian's Wall?). Why does Nottingham look like Carcassonne? Why are the Merry Men so glum? Why do they live like Ewoks up in the trees? Why is Marian so old? Why does Will Scarlet(t) not wear any red whatsoever? What happened to King John? Why is the film so dreadfully long? Etc etc etc...

The worst bit of all:

Kevin Costner. Wooden acting, boring voice, US accent - if he is the inspiring leader of a band of English outlaws then I'm a banana. Perhaps his character should have been called Robin Wood.

Sean Connery in an even briefer cameo role.

The baddies. Michael Wincott as Guy of Gisborne makes an excellent evil henchman to the Sheriff of Nottingham.

And last but by no means least, Alan Rickman makes an excellent Sheriff, playing the role with so much ham that he might as well be in panto. He also has the best lines :)

Watch it with an uncritical eye and you might enjoy it. If however you don't like to see English legends casually trampled underfoot by an uncaring Hollywood production, see the excellent 1938 version with Errol Flynn. Now that's proper swashbuckling!

I'll give 'Robin Hood: Prince of Thieves' 2/5 stars - but only because I have seen even worse...

Not Anamorphic! - Robin Hood: Prince of Thieves review by KL

Everybody knows this film by now. A wooden American actor playing a slightly camp Robin hood with a stellar supporting cast.

Yes, it's kitch, but it's also great fun.

The problem is that the DVD offered by Cinema Paradiso is a truly awful low resolution non-anamorphic version that looks terrible.

I watch a lot of rentals on a laptop on the train and while it might have looked okay on a 14" screen, this one arrived on a Saturday and was watched at home - a painful experience.

Just checked on Amazon and there's no information about whether this is standard on the DVD release so if I decide to buy a copy, it looks like it'll have to be the Blu-Ray.