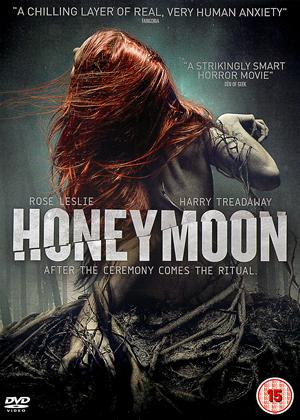 Synopsis:
Young newlyweds Paul (Harry Treadaway) and Bea (Rose Leslie) travel to a remote lake house for their honeymoon, where the promise of private romance awaits them. Paul is woken in the middle of the night by a shaft of light entering the cabin, which sets off his bedside alarm. Returning to bed, he finds it empty and, after an anxious period of search, discovers a naked Bea cold and disoriented in the woods. As she becomes distant towards him and her behaviour increasingly peculiar, Paul begins to suspect something more sinister than sleepwalking took place in the woods.
Actors:
Rose Leslie, Harry Treadaway, Ben Huber, Hanna Brown, Henry Lawrence
Directors:
Leigh Janiak
Producers:
Patrick Baker, Esme Howard
Writers:
Phil Graziadei, Leigh Janiak
Studio:
Arrow Films
Genres:
Horror, Thrillers

This film is as strange as it comes. It starts out quite good, but after she sleepwalks into a woods it goes downhill all the sodding way. There is no explanation what happened to her or what was inside her. To be honest the film was a load of baloney.

as with the previous review, I agree, it started out quite good but went down quickly. so, the wife disappeared into the woods, yes, obviously the aliens got her, but it wasn't too clear. she became pregnant, and there was one awful scene where he pulled the alien baby out of her, (we all had to check this was a 15 rating - we'd have given it 18), and the ending wasn't exactly great. ok. for the first half, it's ok, 2nd half confusing.

Yet again we have a horror movie with attractive white folk that go to a secluded cabin in the woods and weird stuff happens. For the life of me, I don’t see the fascination with horror films, and yet this one seemed different. The posters released looked more like a lovely romantic comedy than horror film, and yet Honeymoon did well at sticking to horror film conventions. I give it four out of five stars.

The film begins with the seemingly normal and in-love couple - Paul (Harry Treadaway) and Bea (Rose Leslie). They are newly-married, and decide to spend their honeymoon in a cabin shrouded in the darkness of the woods. It is not long until Paul awakens and finds Bea missing. He searches for her, eventually finding her standing, naked, in the middle of the forest. She is disoriented, and cannot remember what has happened to her. Things go from weird to weirder, and Paul begins to think she is not the woman he married. Is this all one big misunderstanding, or is there more in the woods than the young couple were aware of?

Honeymoon was directed and co-written by Leigh Janiak - her feature film debut. I find it inspirational to see a female filmmaker succeeding, but of course there were moments that were rather lack lustre.

The story is quite simplistic with a semi-unsatisfactory ending. It seems to have attempted to ‘always leave the audience wanting more’, but did this by not fully explaining itself. This was made all the more unfortunate - and yet almost expected - because the set-up was so good.

The leads, most notably Rose Leslie (Game of Thrones), did a good job capturing the emotions, though their accents were off. For the majority of the film, it is only these two characters, and so the actors had to be interesting and have believable chemistry. In my opinion, they did achieve this.

It’s hard to not feel uneasy when in a cabin in the dark woods, so there was not much needed in the way of setting the scene. I have definitely seen better horror films made on lower budgets, but this one did well with its limits. We were focused more on the human side of the drama, and were influenced more by the effects we could see it having on them.

Critic reviews have been quite kind to this film, but the general audience has been less than positive. The major downfall is the ending, with most finding it hard to understand and turning to the internet for explanation.

The things I like about this film - not as ‘hardcore’ in its horror and gore, more character and relationship-focused - are what will probably turn a lot of people away. For those that like to be truly terrified and see a plethora of gore, this will not be a film for them. It also has too much horror and gore for those that don’t like it at all. It appeals to a very limited audience.

In general, I liked it, and I recommend it.