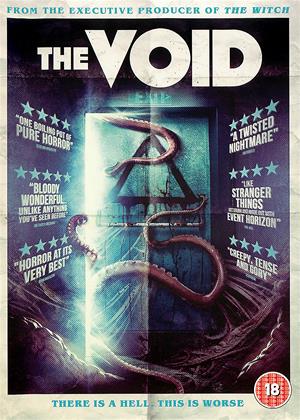 Wowzers - The Void review by TH

I didn't know anything about this film before I saw it but was utterly blown away. It takes ideas from several of my favourite classic films such as Hellraiser, The Thing, Evil Dead, Event Horizon, The Abyss and The Mist, and combines to produce something utterly original and captivating. One the best and most innovative horror films of the 21st century.

Filling the VOID. - The Void review by porky

I had not heard about this movie before seeing it, just seemed a bit HP Lovecraft from what I could make out. I wasn't disappointed in any way, Like the Bastard son of 80's Cult Classics HELLRAISER and From Beyond,and Verging almost on The KEEP by the end , it is Grizzly,Demonic and Dark with Great Old Style GORE DRIPPING special effects ,Body Morphing and Brain Bursting in Actuality and thankfully NO Rubbish CGI. Best Newly made 80's Classic Style Horror i've seen in a Long time. Nice to see a movie that doesn't rely entirely on Computer Wizardry for a change.

can be a bit confusing at times, but on the whole a decent horror flick. Not unlike 'The Thing' by John Carpenter.

The Void is an excellent exercise in several types of horror/terror, mainly Lovecraftian and Clive-Barker-like elements that intertwine, superimpose onto each other, and mesh so well that one can say they complement each other more than they exist as separate entities in the film. Which itself is quite the uncomfortable experience, comfortably speaking; the core premise of the film can be located right within its bizarrely atmospheric/gothic take on what horror is like, and what the rendition of hell looks like to an outsider and while you’re in it as well. To this extent, The Void is a rare gem, and possibly a cult horror flick in the making as is.

The film very much plays like a throwback to classic 80s horrors, one notable example being John Carpenter’s ‘The Thing’ (one of my all-time favorite films, like ever). In addition, The Void has some of the best creature effects in recent years – all thanks to a deliberate effort by the filmmakers to go with live-action puppets/creature designs instead of the easier way out – CGI. The one time The Void uses CGI is very much deliberate and adds additional layers of meaning to an otherwise excellent narrative progression, in all the meanings of that word.

When it comes to sets, sound design, editing, mixing, costumes, continuity, and tone, The Void pretty much excels in all of these categories and puts other, more known (and harder on the budget) features to shame. The feel of the offering resembles another, quite possibly a gravely overlooked feature, named Silent Hill; the atmosphere is more-or-less on par (i.e. mysterious to a point of being pervasively, bizarrely surreal), since both films involve some kind of nightmares in one form or another. And, The Void juggles all of these categories with surgical precision and a dash of a visionary direction and filmmaking flare.

Perhaps the only criticism I have of this offering is its screenplay, which granted, is the most difficult aspect to properly nail. The writers understand the need to leave things unexplained and organically build up a proper mystery, but they forgot that an exposition is a film’s worst enemy and an audience’s potential trigger for boredom (that’s hard to go away after it’s firstly introduced). Even so, the other positives far outweigh the only one potential negative I have about this film, so there you have it.

Finally, is The Void really worth your time, or is it possibly just another, how do you say this: dud? Thankfully, The Void is actually the former, so go ahead and spare some of your hours to watch this film.