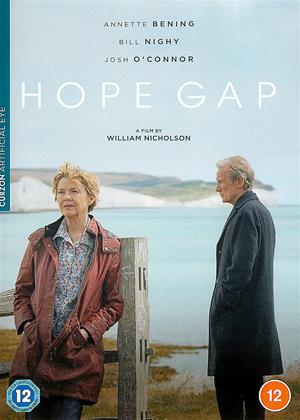 Ignoring the largely indifferent reviews, I took a punt on this one, but unfortunately pretty much everything, be it the acting, the screenplay, the direction, all falls rather flat. It's a promising premise - most divorce dramas start at the beginning and lead you to the break-up, whereas this one starts at the end and concentrates on the fall-out, but sadly, since it seems deliberately keen to avoid any kind of emotional depth, what we end up with is a very trivial piece about an important subject and you end up not really caring much about these people.

Nighy as Edward appears right for his role; his early scenes of biding-his-time tolerance before the great revelation are pretty good, but he remains rather one-dimensional throughout, and whilst O’Connor does ok with a dreadfully thin script, they remain more archetypes of a feuding couple than flesh-and-blood people who were once in love with one another; Nicholson’s failure to probe Grace and Edward’s interior landscapes, or even get at the root problems of their marriage, only makes the film’s attempts at big emotional gestures feel all the more hollow. Added to the mix is Josh O'Connor as son Jamie, but rather than explore the dysfunctional context of this father-son relationship and whatever led up to such a callous, manipulative decision, Nicholson settles for propping him as the helpless middleman with the result that he spends much of the film giving us various pained expressions of one sort or another. And when he finally does have something to 'do' it all ends badly - a truly terrible sequence involving Jamie talking to his mother about a desire to commit suicide on the cliff edge is terribly trite - I've seen better work from sixth-formers, frankly. The overall result of all this is a film that, as with a dull play (and this does feel very 'stagey'), tries your patience at times. Meanwhile, Cinematographer Anna Valdez-Hanks provides breathtaking views of the coastline, but those vistas feel more like some tv nature documentary rather than anything complementary to what is going on, whilst the portentous score is simply an irritating distraction.

There's one or two good lines that get us underneath Grace's complex skin, as it were, but, aside from an ill-judged attempt to shoehorn some famous poetry into the action, the basic problem is that Grace is defined entirely by her relation to Edward and Jamie. We’re told that Grace is a creative soul nourished by her faith and driven by her passion, but except for one brief scene of her at early Mass, we see precious little of either - it’s as if she disappears as soon as the men in her life leave the room. Perhaps only a man could make a film about a 'left woman' that cares more about the leaver.

An awful leaden script which is leads the actors to speak in leaden, predictable tones. Really not worth watching

Wow this film was terrible. The acting was really bad from 2 actors who are normally fairly good. I feel this is down to one of the worst scripts I've heard in a while. It felt like a first draft. Nothing interesting happens at all and you will not care one bit about the characters who have zero personality.

Both Nighy and Benning should erase this from their cv.

Adapted from a stage play of the same name, Hope Gap is the story of what happens when a couple in their late middle age living in an English seaside town, separate after 29 years of marriage. Annette Bening and Bill Nighy are the couple, and Josh O'Connor is their grown-up son, living away from the family home. It's a powerhouse of performances that give life to this otherwise middling drama.

To give credit to writer-director William Nicholson, adapting his own play here, he gives it some welly… there's beautiful seaside shots, lashings of piano and string music and he does try to break up some long scenes of dialogue that would remind an audience it's adapted from the stage. But it's not enough - in particular, the remaining dialogue feels very stagey and distracting; rich in metaphor and details of people's inner lives exquisitely expressed that would sonorously fill the glorious vacuum of a theatre, but here it feels stilted. The drama is sometimes affecting but mostly static and it does feel thin, as if this is just a vehicle for some big performances but without the substance to give them much to say.

If you're an Annette Bening fan, it's another good role for her although on occasion her performance feels larger than it needs to be, including an extravagantly posh English accent. But otherwise this stage play adaptation is faintly if inevitably disappointing, like a wet weekend at the English seaside.

Beautifully acted by Annette Bening, Bill Nighy and Josh O'Connnor and beautifully directed and written by William Nicholson (how could the writer of Shadowlands do otherwise?). While the minutiae of marital collapse is both utterly credible and exhaustively explored.

With two stunning lead performances from Annette Bening and Bill Nighy this is definitely worth watching. It is though a dour story of a marriage breakdown. Grace and Edward have been married for 29 years with one adult son, Jamie (Josh O'Connor). She is a critical, uncompromising woman who holds the view that challenge and rigour are the means to have a loving marriage, but Edward, a demure, gentle man, feels constantly harassed by her and one weekend announces he's leaving having met another woman. This sends Grace into a tailspin of anger, despair and stubborn resistance to Edward's request for a divorce, which forces Jamie, a young man with his own emotional problems, into the position of mediator. Bening is really excellent here and she plays Grace as almost a monster to whom any compromise is a weakness to be resisted. Nighy is cleverly restrained in opposition and the relationship dynamic is exceptionally well done. This is though a depressing story and whilst clearly a character piece it left me a little empty by the end. Worth seeing for the performances though.

Like everything, films are very much an individual taste. Contrary to most of the above reviews I really liked this film. I was alternately irritated/annoyed./sympathetic towards the parents characters, and I thought Josh O Connor as the son stuck in the middle was great. Although there is a lot of negativity about the film some people seen to "get it" and i happen to be one of them! At the end of the day it depends on what you like and what you relate to. 100 people could watch the same film and you'd get 100 different reactions. I thought it was calm, quiet, very British and seemed true. I've never been in a marriage break up or been a child in one, but to me this seemed realistic.

I've watched quite a few disappointing films recently so it was nice to watch something I found rewarding and worth watching.

I want to leave her - Hope Gap review by HO

Where to start? Really not great, in my humble opinion. I wanted to leave this woman after ten minutes into the movie, never mind 29 years of marriage. An agressive/passive aggressive nightmare of a woman, projecting her nonsense on the world ain't that entertaining really, not in this movie anyway. I guess, as a warning to women who verbally batter and attack their husbands and then are suprised and hurt when they leave, it could be useful.

I don't think the play transfers well to the screen. lots of panoramic views of the white cliffs, the sea etc to fill in gaps. Some good acting, especially from the son character but Annette Benning's hash of the English accent was painful. Think Bridget Jones and Emma, all that flat vowels!!! She sounded more like Michael Caine than anything. Obviously there were no female actors of a certain age who actually have a natural English accent - or am I being racist? Even Bill Nighy doesn't come out well.

A lot of the reviews here are pretty damming, maybe they were expecting Coronation Street or East Enders. This is fiction but ir is drawn from the author's experiences and so is real drama, not shouting matches and car chases. It is a film that you can reflect on which explores the human condition in a way that may be painful for anyone who has experienced such relationships and moving for anyone with empathy. The acting is good, the three main characters carrying the film. There is no overdone melodrama, but sympathetic portrayals of the characters that were scripted. One of the best films I have seen this year. I enjoyed the featurette too.

I agree with the insightful analysis of “PD” although I think I enjoyed the film more.

Annette Bening’s character and her portrayal was unusual. She played it with gusto but I felt the conclusion needed something more like a bunny boiler than the anticlimax we got. Did they run out of money. Why did she cave so quickly.

Much of PD’s criticism could be dealt with in a 5 episode tv series which might  allow a more satisfactory ending and deeper understanding of what had gone so wrong. It just didn’t work as a film perhaps.

I really found this film hard going. Bill Nighy always the same in character but you wanted him to just to spit out his feelings and be more touchy feely.

Cannot recommend this film unless you want to be really depressed.