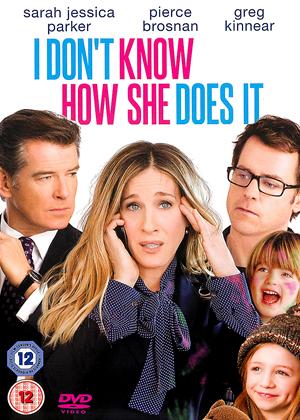 Rent other films like I Don't Know How She Does It

Reviews of I Don't Know How She Does It

Based on the 2002 novel by Alisson Pearson of the same name, ‘I Don’t Know How She Does It’ is a formulaic romantic comedy that is high on wish-fulfillment and yet, is low on the laughs. Granted it’s a movie about a supermom with an unemployed husband with two young kids, working in an investment company with a hot older man for a boss – you would think it could have been mined for inspiration to make it wittier, funnier, and fresher. But still, ‘I Don’t Know How She Does It’ doesn’t know how to do it.

Sarah Jessica Parker is Kate but at first glance, you might think ‘I Don’t Know How She Does It’ is the happy-never-after of Sex and the City’s Carrie Bradshaw. In it, Parker juggles mommy-hood with her career and the results are disastrous. This film espouses that women can ‘have it all’ but as you can tell from the movie, it is at the expense of her health, sanity, and even her family.

The pressure to be both mother and career woman can break a person and although the movie makes light of this, in reality, this is continuing struggle. Interesting to note that even with the frazzled lifestyle that Kate has, she even finds herself a suitor in her widower boss. So after being tired to the bone donning many hats, you can still have room for a secret admire or two? Isn’t life complicated enough for an additional distraction?

As much as it highlights a driven woman in the corporate world, it also makes her a villain for neglecting her family. It’s a damned if you do, damned if you don’t type of situation, which is why this movie is no laughing matter.