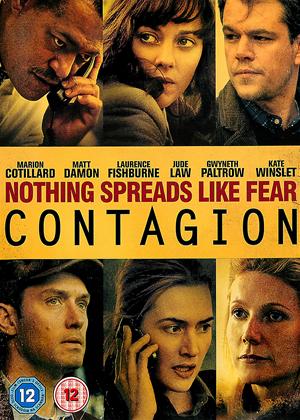 Topical amid coronavirus, this tells of a flu pandemic originating in China with a virus passing from bats to humans. Naturally, for dramatic effect the virus in the story is far more deadly than the one we face.

The science is real and well-explained. The film avoids the Hollywood stereotype of the maverick scientist up against the 'government'. Instead, the CDC get to work, risking themselves, unpicking the mystery and managing the spread. The charismatic YouTube influencer with 12 million followers is part of the problem, advocating his own quack treatment and preaching against the real vaccine, when it finally arrives.

The film depicts first panic buying, then looting and a partial breakdown of society, and a realistic depiction of human nature - selfishness, mistrust, excessive fear. Significant subplots take place in China, most the story is set in the US.

End of the world doom-fest virus movie, one of many, which does NOT predict the Covid19 pandemic - Contagion review by PV

This is one of those movies with quick-fire dialogue and everyone talking over each other. SO subtitles recommended maybe, and also rewinding and rewatching scenes. esp those discussing complex financial stuff (which even the moneymen and women do not understand when they sell them to the gullible). Written by Scott Z Burns. I liked the international aspect - ranging from Hong Kong to London and more.

Jude Law and other British actors excel here. The brilliant Bryan Cranston plays a general before Breaking Bad made him a superstar. 1970s Hollywood star Elliot Gould rocks up too!

Lots of rot has been written about how this movie somehow predicted the Covid pandemic.

Nope, it didn;t; it's just another viral epidemic movie (and ultimately an END OF THE WORLD fear story and they are as old as humanity). Many have been made. Flemish Belgian TV drama CORDON a decade ago; Brilliant British film THE GIRL WITH ALL THE GIFTS (the best virus film ever and predicts the Covid19 pandemic better in a way than this); 28 DAYS LATER; and in 1975 SURVIVORS was terrifying at the time (ignore the woke pc remake). THE MAD DEATH (1981) another British TV drama back when they were good and concerned more with drama than ticking diversity boxes and preaching pc propaganda. Even INFERNO from the Dan Brown book covers the same ground. It is ultimately jet fear of death on a micro and macro scale.

This movie just shows how quickly a pandemic can spread. which is always terrifying. Epidemics and pandemics can and do happen - it was never IF but WHEN. One could say the same re the coming resistance to antibiotics which will kill many this century, and of course overpopulation which means Nature will cull us, sadly after so much of Nature has been destroyed.

Watch the EXTRA little film first before watching as that sums up how a pandemic starts, and we are living it now (and yet again, as with this movie, China caused it). This movie even shows a vile wet market where most thing coronavirus started with the animal abuse there and Chinese demand for eating wildlife. This movie is more civilised - watch the very end to see how it started. More viruses will emerge from the wild the more certain amoral empires deforest them and demand wildlife to eat. Blame where blame is due. Make them pay.

Music's a bit dodgy and I am no Soderbergh fan. But this is a decent watch.

This should have been a tense, dramatic thriller and it started off well enough with the scenes with Damon and Paltrow. But after that it descended into a boring and slow-moving film; watching a culture grow would have been more interesting.

From award winning director Steven Soderbergh comes a cast full of even more Oscar winners and nominees in this scarily realistic thriller about a deadly virus.

After all the threats of swine and bird flu, it is no wonder such a movie has got audiences all riled up; where narratives of this nature are normally held together by thinly veiled moral lessons or blatantly obvious horror clichés Soderbergh and his co-writer Scott Z. Burns have filled Contagion with a disturbingly accurate dose of gritty realism.

The cast of this piece is almost unbelievable including Gwyneth Paltrow, Laurence Fishburne, Jude Law, Kate Winslet and Matt Damon, all of whom contribute excellent performances to this study of humanity and society. On a few levels the movie raises some really interesting points and shows, with a good helping of drama, the way fear can tear civilization down. Unfortunately these aren’t really explored to their full potential in the movie and it simply leaves you watching a germ riddled but average action movie.

Although the premise of the movie is most intriguing the movie quickly spirals downward after the first quarter, when blind panic ensues and the movie becomes just another disaster movie but with a nasty cold rather than an alien attack.