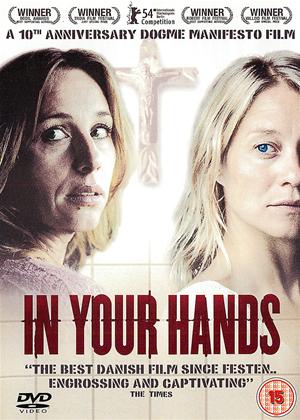 Synopsis:
Is trust more fragile than mistrust? Is knowledge stronger than faith? Is pain more powerful than love? Who dares place their life in the hands of someone, or something, else? Anna, a newly graduated theologian, and Frank have been trying for years in vain for a baby. They believe that perhaps a higher power is intervening. Then Anna is offered a temporary position as a prison chaplain in a women's block and becomes spiritual advisor to the prisoners. The inmates include Kate, a new transfer with a mysterious privileged status and Marion who confides to Anna of Kate's 'special powers', which aid Marion in overcoming a drug addiction.
The dominating Jossi, who supplies the block's contraband, is not pleased by Kate's growing influence, her forbidden relationship with prison guard Henrik and the growing suspicion that the secret that Kate harbours is more horrific than anyone can imagine. As Anna's inner turmoil grows in the face of Kate's faithless gift and the revelation that she is finally pregnant, but with a child who may possibly be born defective, Anna's life, her conscience, and her very beliefs are forever changed.
Actors:
Ann Eleonora Jørgensen, Trine Dyrholm, Nicolaj Kopernikus, Sonja Richter, Lars Ranthe, Henrik Prip, Jens Albinus, Kirsten Olesen, Mette Munk Plum, Benedikte Hansen, Sarah Boberg, Petrine Agger, Mia Lyhne, Luna Worsøe Mollerup, Lisbet Lundquist
Directors:
Annette K. Olesen
Writers:
Kim Fupz Aakeson, Annette K. Olesen
Aka:
Forbrydelser
Studio:
Metrodome
Genres:
Drama
Countries:
Denmark, Drama

Reviews (1) of In Your Hands

The director says that she set out to make a "feelbad" moovie, and having seen it I agree that is exactly the feeling you are left with. So why watch it? It is not easy viewing, and involves religious themes, and consideration of abortion, and is based in a womens' gaol. However, despite the ending, the main story of the film is well crafted, and draws the watcher deeply into the characters' lives.

There are a number of story strands, involving romantic love, redemption, friendship, conflict between good and evil, the contrast between the power of God and formal religion, and a decision on an abortion. The director crafts these different stories skillfully together, generally building up hopes of a triumph of good - until near the end when it all unwinds to a depressing finish. Apart from the depressing ending, the main downsides for me were the extraordinarily abrupt ending, just as if the film had fallen apart, and the constant motion of the camera. Dogme films are okay, but this shouldn't prevent the camera being held steady. Even the credits were waving all over the screen. You also have to follow some fairly complex discussions through sub-titles (unless you are Danish).

That said, if the subject interests you, much of the film is really memorable - just a shame that it is only a build up to sadness at the end.